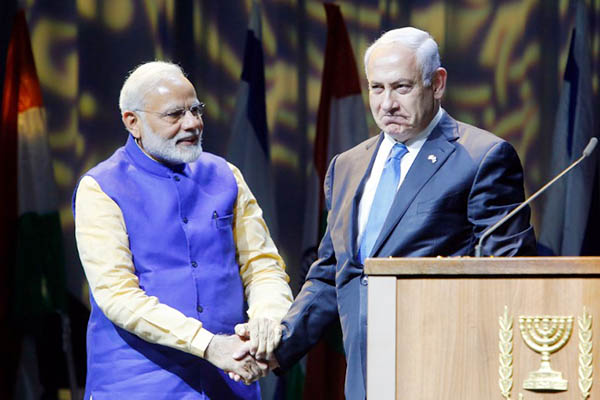 Leaders present series of agreements during first visit by an Indian P.M. to Middle Eastern nation

Prime Minister Narendra Modi held talks with Benjamin Netanyahu on Wednesday on the first ever visit by an Indian premier to Israel as they sought to deepen ties beyond high-priced defense deals.

The two leaders presented a series of agreements between India and Israel for cooperation on satellite technology, water and agriculture, as well as the creation of a $40 million innovation fund. The agreements are part of efforts to extend relations in civilian areas between both countries, with Israel already selling India an average of $1 billion per year in military equipment.

Netanyahu and Modi greeted each other warmly from the onset Tuesday of the Indian prime minister’s three-day visit, calling it “historic” and “groundbreaking.”

“I have a feeling that today India and Israel are changing our world and maybe changing parts of the world,” Netanyahu said after talks with Modi in Jerusalem. He added that they had asked their staffs to put together concrete plans for further cooperation in a range of fields by the end of the year.

Modi said the discussions extended beyond bilateral projects to “how our cooperation can help the cause of global peace and stability.”

The Indian premier also said they “agreed to do much more together to protect our strategic interests and also cooperate to combat growing radicalization and terrorism, including in cyberspace.”

Netanyahu and other officials gave him a red carpet welcome at Ben Gurion airport near Tel Aviv as he began his visit on Tuesday. Israel, constantly searching for allies at the United Nations and for new business partners, has portrayed the visit as a major diplomatic victory.

Israeli analysts have noted that Modi is not scheduled to travel to Ramallah to meet Palestinian leaders during his three-day stay, as is common for visiting dignitaries. Modi did however meet Palestinian president Mahmud Abbas in New Delhi in May.

India has traditionally voiced its support for Palestinian statehood, long shunning ties with Israel. But the frost has thawed in recent years, with India seeking closer defense ties—particularly as it moves away from relying on traditional ally Russia for its military hardware.

India is the world’s biggest importer of defense equipment, and Israel has become one of its major suppliers. Israel Aerospace Industries on Wednesday said it agreed with the Kalyani Group to build a “new maintenance center in India for selected advanced air defense systems.”

IAI said it also signed an agreement “for industrial cooperation in the production of composite aero-structures” with India’s Wipro Enterprises.

In April IAI said India would buy nearly $2 billion worth of weapons technology from Israel, making it the military exporting giant’s largest ever defense contract.

The deal will see IAI provide India with an advanced defense system of medium-range surface-to-air missiles, launchers and communications technology, it had said.

The Hindu nationalist makes the trip after his visit last week to Washington, where he and U.S. President Donald Trump embraced each other as friends, vowing to work more closely on combatting terrorism, the war in Afghanistan and defense cooperation. While ties with some U.S. allies have been strained by Trump’s complaints that Washington has been the loser in trade agreements, Modi appeared sensitive to his host’s emphasis on transactional diplomacy.

Modi has seemed to find similar common ground with Netanyahu, Israel’s longtime rightwing prime minister who hosted Trump in May.