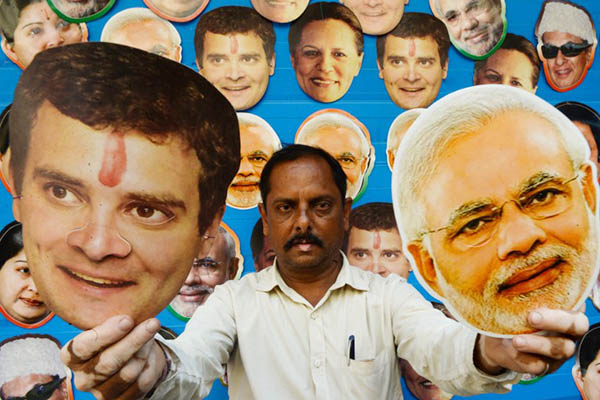 Vedic astrology is big business in Hindu-majority India and stargazers are making a host of predictions for the world’s biggest elections starting next month—their many followers hanging on every utterance.

Some 900 million voters are registered to cast ballots in the vote in April and May, which will see Gandhi’s Congress party seek to dislodge Modi’s Bharatiya Janata Party (BJP) from power.

Shah, 49, a celebrity holistic healer who practices tarot reading, says most of them will plump for Modi, himself a devout Hindu. “When it comes to tarot cards Modi is like the emperor or the magician where the power of self-knowledge, of spiritual balance, of karma, is in perfection,” she explains. “Rahul Gandhi is more like the devil because he’s always confused. There is a conflict there because he is a Gemini so has a dual personality,” Shah adds.

Modi, 68, and the right-wing Hindu nationalist BJP swept to power five years ago by winning 282 out of 543 seats, forming the country’s first majority government in almost three decades.

Shah expects Modi to be returned, but with a vastly reduced majority. Pre-election polling suggests an even closer contest, with many forecasting that neither party will win the 272 seats needed for a majority. Lobo also has a prediction that hits closer to home for her—a 35 percent chance that Modi will do something to help India’s two-million-strong transgender community.

Indians consult soothsayers for advice on a raft of subjects from whom to marry to whether to buy a house or strike a business deal. Many businessmen, Bollywood actors and politicians have personal astrologers scrutinize their stars closely to determine auspicious days to hold functions, release a movie or make political announcements.

For the election, Sharma says the planets are aligning in favor of Congress—based on the birth dates of the parties and their leaders—and that it will be able to persuade smaller, regional parties to join them in a coalition.

“Congress’s moon sign is Virgo and at present a favorable Jupiter Mahadasha [period] is happening for them while the BJP’s moon sign is Scorpio,” he explains. “Rahul Gandhi’s favorable period has started and his moon is more powerful than Narendra Modi’s moon so my prediction is very clear: Rahul Gandhi will either become the prime minister or will make the prime minister with the support of his party.”

He sees the elections being “extremely volatile” because they were declared at an inauspicious time—when the sun was setting instead of rising—and that they may witness more violence between India and Pakistan.