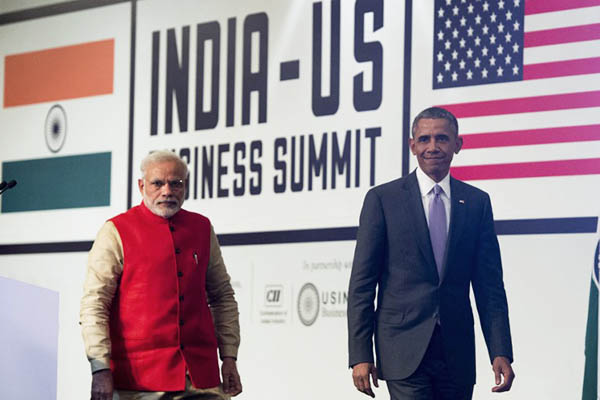 Indian premier says his country will protect and nurture the intellectual property of foreign investors.

Prime Minister Narendra Modi vowed to banish India’s reputation as a tough place to do business on Monday, telling U.S. President Barack Obama and American CEOs that he would ease off on taxes and encourage innovation.

Obama, who is in the middle of a three-day visit to India, hailed the new change in tone at the top of India Inc. but said there were still “too many obstacles” for businesses wanting to break into the vast market. Under the previous left-leaning Congress government, investors frequently complained about a hostile business climate in India, frustrated by bureaucracy and corruption. In the last World Bank rankings on the ease of doing business rankings, India placed 142nd out of 189 countries.

But in his speech to a joint group of U.S. and Indian businessmen, the new right-wing prime minister said he aimed to have his country up in the top 50 and promised his audience that things would change drastically. “You will find an environment that is not only open, but also welcoming,” he said in the address to executives such as PepsiCo chairman Indra Nooyi and MasterCard president Ajay Banga. “We will guide you and walk with you in your projects. You will find a climate that encourages investment and rewards enterprise. It will nurture innovation and protect your intellectual property. It will make it easy to do business,” said Modi, who was elected last May after promising to transform the Indian economy following growth rates tailing off to their slowest rate in a decade.

One of the main gripes by foreign businesses under Congress was that the tax regime was both aggressive and arbitrary. British mobile giant Vodafone is currently embroiled in a bitter, $2.4-billion battle with India’s tax authorities, while Finnish company Nokia had a plant in India seized over a tax dispute.

Vodafone is battling the demand for back taxes over its $10.7-billion purchase of Indian mobile operations in 2007 from Hong Kong-based Hutchison Whampoa, while India’s tax authorities have also locked horns with Royal Dutch Shell, IBM and other international companies.

In his speech, Modi acknowledged that the tax rules had been too harsh and that he planned to lessen the burden. “We have removed some of the excesses of the past. We will soon address the remaining uncertainties.”

Modi sees attracting more foreign investment as key to putting India on the path to sustainable growth and has been extensively promoting a “Make in India” campaign designed to turn the country into a manufacturing hub. The stark change from Congress has been welcomed by Obama, who outlined investments worth some $4 billion, including an announcement that the U.S. Trade and Development Agency would provide $2 billion for renewable energy projects.

But the U.S. president said there should be no illusions about the scale of the task ahead, adding that their economic relationship “is defined by so much untapped potential.”

“We have to keep working to make it easier to do business in both of our countries,” said Obama. “There are still too many barriers, hoops to jump through. We hear this consistently from business leaders such as you,” Obama added, speaking alongside Modi. “We have got to do better.”

Speaking last week, the U.S. ambassador to New Delhi said bilateral trade was now running at around $100 billion a year—five times the level of a decade ago. But Ambassador Richard Verma also said there was potential for the levels of bilateral trade to grow by another five times.

Before becoming prime minister, Modi spent more than a decade as chief minister of the thriving coastal state of Gujarat, which won a reputation under his stewardship as India’s most investor-friendly place. “Everything we wish to do involves enterprise and investments, but even more—innovation and imagination,” said Modi.