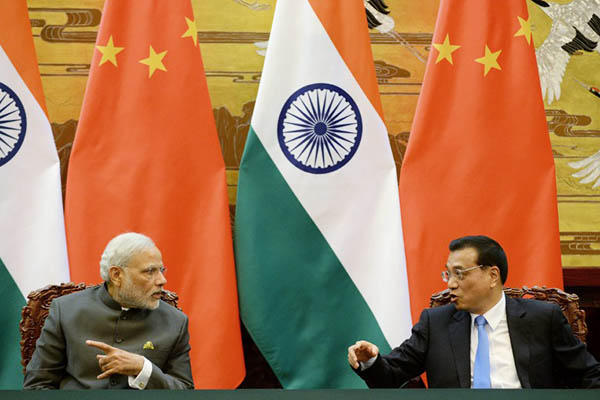 Visiting Indian Prime Minister Narendra Modi told his Chinese counterpart on Friday that Beijing needs to “reconsider its approach” to relations between the Asian giants, as the Hindu nationalist leader departed from the usual diplomatic pleasantries.

Modi, who despite his hardline reputation has moved to engage with Beijing since his election last year, made the remarks after being welcomed to the Great Hall of the People by Premier Li Keqiang. “I stressed the need for China to reconsider its approach on some of the issues that hold us back from realizing full potential of our partnership,” Modi said, adding that he “suggested that China should take a strategic and long term view of our relations.”

His comments stood out from the usual public declarations by diplomatic visitors to Beijing, who normally stick to uninterrupted pledges of friendship and good relations. The world’s two most populous nations are jockeying for regional influence in Asia and their relationship is colored by a brief but bloody 1962 border war over the northeastern Indian state of Arunachal Pradesh, parts of which Beijing claims as South Tibet.

Another bone of contention is what Beijing sees as Delhi’s support of the Dalai Lama—a Nobel Peace Prize laureate whom China considers a separatist—and the Tibetan Government in exile, both based in India.

“Our relationship has been complex in recent decades,” Modi said, adding there were issues that “trouble smooth development of our relations.”

“But, we have a historic responsibility to turn this relationship into a source of strength for each other and a force of good for the world,” he said, adding that the Chinese leadership had been “responsive” in meetings. “We are committed to set a new direction between the two largest Asian countries,” he said.

Modi began his three-day visit on Thursday in Xian, the capital of Chinese President Xi Jinping’s home province Shaanxi, where he was hosted by the head of state. This was the first time Xi had welcomed a foreign leader to his hometown, Chinese media reported.

“We do not deny that there are some disagreements between us, but we have far more common interests than differences,” Premier Li said in a speech after Friday’s meeting. “We agree that we need to keep up the momentum on the special representatives’ talks on the boundary question and seek a fair, reasonable and mutually acceptable solution.”

The two countries signed 24 documents, including agreements to cooperate in fields ranging from aerospace and railways to tourism and education, although no details were given, as well as open consulates in Chennai and Chengdu. But relations remain delicate, as demonstrated by the mixed rhetoric, and China has become increasingly assertive in territorial disputes in recent years.

“The bilateral relationship is still vulnerable to many sensitive issues,” said an editorial in the Global Times, affiliated with the Communist Party mouthpiece People’s Daily. “Lack of mutual trust still disturbs both sides.”

China is India’s biggest trading partner with two-way commerce totaling $71 billion in 2014. But India’s trade deficit with China has soared from just $1 billion in 2001-02 to more than $38 billion last year, Indian figures show.