Modi To Woo Neighbors Away From China’s Influence 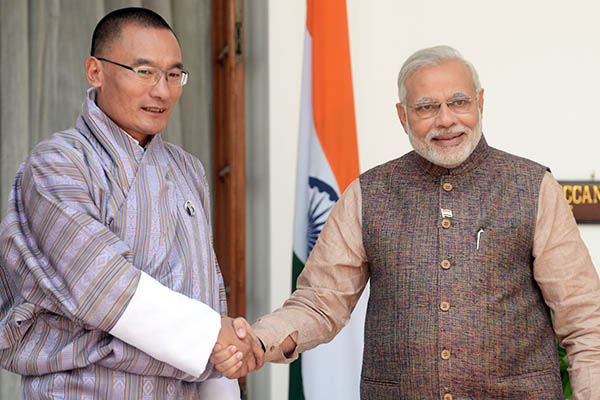 Indian premier wants to shore up his country’s influence in South Asia.

Narendra Modi will step up a charm offensive with India’s neighbors in the hope of stopping them falling into China’s embrace when he travels next week to Bhutan on his first foreign trip since becoming prime minister.

A month after his election, the Hindu nationalist premier will pay a two-day visit to the tiny Buddhist kingdom from Sunday when he will meet his counterpart Tshering Tobgay and King Jigme Khesar Namgyel Wangchuck. “We’re honored to have him choose Bhutan as the first country he’s visiting,” Tobgay said in comments published by the local Kuensel daily. “It speaks volumes about the importance he attaches to the region.”

Tobgay was one of seven regional leaders invited to Modi’s inauguration and analysts say the decision to make Bhutan his first port of call is designed to underline the importance he attaches to neighborly relations, which suffered under the last government.

“Bhutan may be a small country but it is strategically very important and … China is on the other side,” said Ranjit Gupta, a retired ambassador whose postings included Nepal and India’s U.N. mission. “If you aren’t interested in your neighbors, they’ll lose interest in you.”

With the exception of Pakistan, India enjoyed generally close ties with its South Asian neighbors in the first six decades after independence. But critics say the previous center-left Congress party government started to take things for granted, allowing China—which shares a border with four of India’s neighbors—to step into the breach.

There was friction with Bhutan when India cut fuel subsidies ahead of elections last year, although they were restored after Tobgay’s victory. The move was seen as a rebuke over Bhutan’s moves to engage more with China but commentators say India is more likely to keep its neighbors on side by reaching out to them rather than punishing them.

Former diplomat G. Parthasarathy said “far greater imagination” was needed given China’s economic clout. “The fact of the matter is that China’s power has grown substantially and its economy is larger,” he said. “As the Indian economy has slowed, our ability to engage in the neighborhood has been affected.”

As Chinese investment has grown, countries such as Sri Lanka and the Maldives have fallen further away from India’s sphere of influence. Even Bangladesh, which partly owes its existence to India’s intervention in its independence war, is seeking China’s help to build a new port.

Despite his nationalist credentials, Modi has stressed a desire in his early days in office to forge good ties with Beijing and has invited President Xi Jinping to visit. There had been expectations Modi would pick Tokyo for his first trip but such a choice could have upset China.

“Mr. Modi—who is keen on strengthening economic links with China—is clearly alert to reactions in Beijing were Tokyo to be his first port of call,” said an editorial in The Hindustan Times. “Equally, by heading to Thimphu, Mr. Modi conveys to China that just as he is alert to dynamics in its neighborhood, Beijing too must be sensitive about Delhi’s sphere of influence.”

It is three years since the eight-nation South Asian Association for Regional Cooperation (SAARC) has held a summit. In a speech read by President Pranab Mukherjee on Monday but written by the premier, Modi said he wanted “to revitalize SAARC as an effective instrument for regional cooperation and a united voice on global issues.”