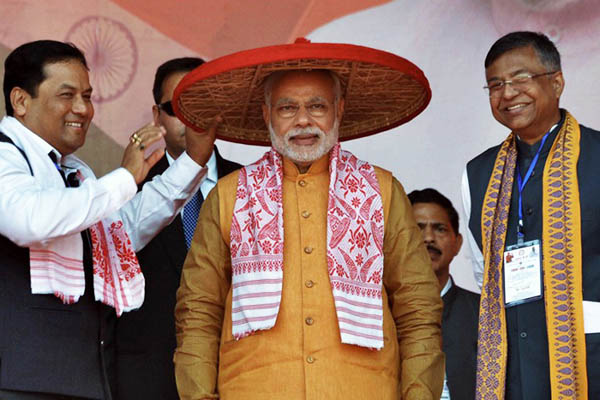 Indian Prime Minister Narendra Modi vowed on Sunday to halt illegal immigration from Bangladesh into Assam, saying they were “destroying” the northeastern state.

Modi, whose rightwing Hindu nationalist party stormed to power at May elections, said: “Bangladeshis are entering Assam every day and destroying the state. I will make an arrangement by way of which all the routes used by them to enter Assam are closed.”

Addressing members of his Bharatiya Janata Party, which is trying to make political inroads in Assam, Modi referred to his election campaign earlier this year, during which he said illegal immigrants from Bangladesh should pack their bags and leave, warning of tough action if he were elected prime minister.

Tensions have been high in recent years in Assam. More than 40 Muslims including women and children were slaughtered in May this year by Indian tribal separatists called Bodos. The tribals and some politicians blame unrest between Muslims and Bodos in Assam on an influx of illegal immigrants from Muslim-majority Bangladesh. Muslims claim they have been targeted by well-armed Bodo militias in land and other disputes.

On Sunday Modi promised that his government would permanently resolve the illegal immigration issue by securing a long-pending land swap agreement with Bangladesh. “When we execute the land swap deal it might look like a loss for Assam, but in the long run Assam will gain by the deal,” he said. “We are not going to compromise the interests of Assam.”

India and Bangladesh have for years been trying to resolve their land border disputes, including settling the future of 162 enclaves—small pockets of one country’s territory surrounded by that of the other. More than 50,000 people live in the enclaves, cut off from their respective governments and without access to many basic services.

The enclaves date back to ownership arrangements made centuries ago between local princes. They survived the partition of the subcontinent in 1947 after British rule and Bangladesh’s 1971 war of independence from Pakistan. The two countries signed an agreement in 2011 to demarcate their 4,000-kilometer border.