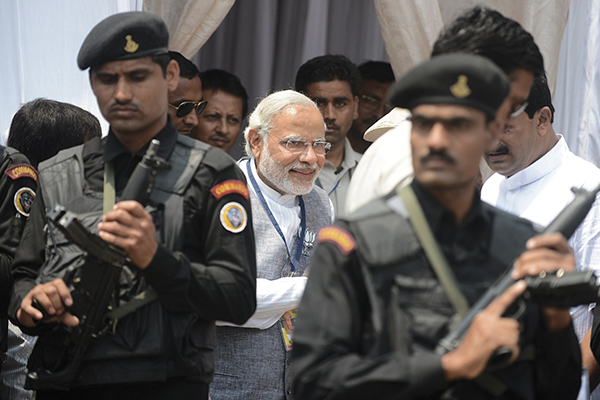 Interior minister Chaudhry Nisar Ali Khan hit back at Indian election frontrunner Narendra Modi on April 29 after the latter claimed in an interview that he would ensure terrorist Dawood Ibrahim was recovered from Pakistan and brought to justice. Ibrahim—declared a “global terrorist” by both the U.S. and India—has long been rumored to be hiding in Pakistan. However, Islamabad has repeatedly denied the allegation. “Such a provocative and condemnable statement from the expected prime minister of India and leader of a major political party is touching the last limits of enmity toward Pakistan,” said Khan in a statement, adding that if Modi continues to make such “irresponsible” statements he could destabilize regional peace. “The Pakistani leadership, people, and particularly the armed forces have the right and power to reciprocate the sentiments coming from across the border,” he warned. Ties between Pakistan and India have been strained since the 2008 Mumbai attacks, which New Delhi insists were orchestrated from Pakistani soil. Prime Minister Nawaz Sharif and Modi, in separate statements, have expressed a desire to improve relations between Pakistan and India. If Modi isn’t careful during his election speeches, that job would become yet more difficult.

After the ‘Surgical Strikes’