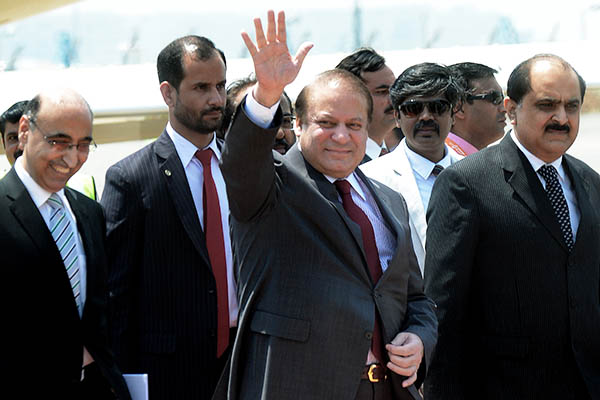 Prime Minister Nawaz Sharif said the inauguration of Narendra Modi as his Indian counterpart on Monday was a “great opportunity” for the two neighbors to open a new chapter in relations.

“It is a great moment and a great opportunity,” Sharif, who is in New Delhi as a guest for the swearing-in ceremony, told the NDTV network. “This is a chance to reach out to each other. Both governments have a strong mandate,” he added, according to a transcript provided by the Pakistan High Commission. “This could help in turning a new page in our relations.”

Sharif is the first Pakistani prime minister to attend the inauguration of an Indian leader since the creation of the two countries in 1947 after the end of British colonial rule. The two countries have since fought three wars and remain bitterly divided over the disputed region of Kashmir.

But Sharif, who is to hold bilateral talks with Modi on Tuesday, said that the neighboring countries should use their common heritage to help overcome their differences. “No two nations have ever possessed so much cultural and traditional similarities as India and Pakistan. Why not turn the similarities into our strength?” said Sharif. “We should remove fears, mistrust and misgivings about each other. Both countries should rid the region of instability and security that has plagued us for decades.”