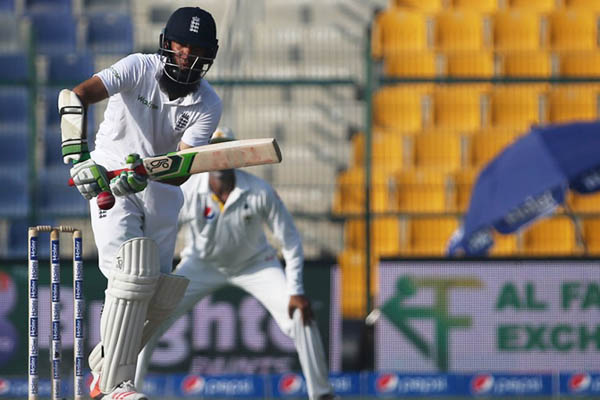 All-rounder says he can understand rival players and inform his team of their plans.

England all-rounder Moeen Ali revealed Tuesday that his Pakistani background helped him gain insights into his rivals plans to dislodge skipper Alastair Cook during his epic double hundred in the first Test.

The reason was that Ali, 28, understands the Urdu and Punjabi languages, which Pakistan players normally use to communicate with each other during games. Born and brought up in Birmingham, Ali’s grandfather married an English woman after migrating from Pakistan-administered Kashmir.

“I do understand what they are saying,” said Ali. “When they had a plan for Cooky I was telling him what they will do.” Cook scored an epic 263 in England’s 598-9 declared in Abu Dhabi in reply to Pakistan’s 523-8.

Pakistan slumped to 173 all out in the second innings to give England a 99-run target in 19 overs but umpires were forced to call off play eight overs early due to bad light.

Ali believes England have worried Pakistan. “It’s given us a lot of confidence and probably given Pakistan a bit of a nudge as well that we are here to be serious,” said Ali, fearing Pakistan will come back strong in the second Test starting in Dubai from Thursday.

“We probably caught them off guard a bit in that last session, but I’m sure they’ll come back stronger and be well aware of it now,” said Ali, who praised fellow spinner Adil Rashid. “I am very happy for him, he took some stick in the first innings,” said Ali of Rashid who went for 163 runs in his wicket-less 34 overs. “As a team we felt he bowled quite well actually. There was nothing in it for him or myself. We kept telling him his wickets would come, he was bowling well in the warm-ups, he’s got so much talent and if his confidence is high he’ll be good.”

Ali said he was happy to fill in as opener. “It was good, just doing a job for the team, making sure that night we didn’t lose any wickets,” said Ali who helped Cook put on 116 for the first wicket in the first innings. “I’ve got to score some runs, we need an opening batter who can score runs. Just need to take one game at a time and keep giving England a good start.”

Ali admitted leg-spinner Yasir Shah—who missed the first Test with a back problem—will boost Pakistan. “He’s obviously their gun spinner and the guy they go to to win them games. He’s obviously a very good bowler but we just need to play him as we would anyone, just get on with it,” said Ali.

But he hoped England can counter the spin threat. “Batting will be tougher here [in Dubai] than Abu Dhabi but we have some really good players of spin. I think Joe Root is probably the best player of spin the world, so we aren’t too phased, we are preparing well and full of confidence,” said Ali.