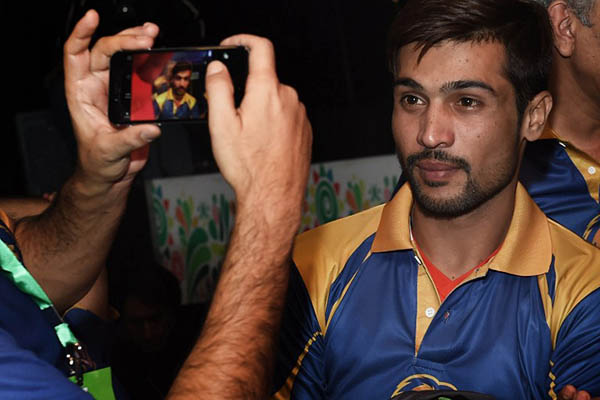 Paceman Mohammad Amir, who served a prison term for spot fixing, said he was ready to respond to his critics with wickets—and love—after being selected on Friday for Pakistan’s limited-overs tour of New Zealand.

The 23-year-old left-armer, who is set to make his international comeback less than four months after completing a five-year ban, remains a polarizing figure for Pakistan’s cricket-mad public and even some teammates.

Last week Mohammad Hafeez and Azhar Ali left a training camp which Amir was attending in protest at his prospective selection. They were later forced to return after being threatened with disciplinary action.

In an interview with AFP, Amir said he was confident most fans were on his side. “I am sure fans will love me,” he said. “But even if there are taunts and harsh remarks I am ready for that and will do my best to reply to them with love and by taking wickets.”

Pakistan will play three Twenty20s and as many one-day internationals in New Zealand later this month. Amir’s inclusion however remains contingent on him being issued a visa by New Zealand—a potential hurdle given his criminal conviction for his role in arranging deliberate no-balls during Pakistan’s tour of England in 2010, along with two others.

After pleading guilty to conspiracy to cheat at gambling and conspiracy to accept corrupt payments, Amir was handed a six-month jail sentence at the Feltham Young Offenders Institution but was released after three months. He said: “I have toured New Zealand before and know they love the game and they are so caring and loving, so I don’t expect anything untoward from them. I am sure they will adore me.”

Before his suspension Amir was regarded as one of the hottest properties in international cricket, having taken 51 wickets in 14 Tests and 25 in 15 one-day internationals, as well as 23 wickets in 18 Twenty20 matches. Since his ban was relaxed in April last year and completely lifted in September, he has seemingly picked up where he left off, taking 86 wickets in 21 domestic four-day and Twenty20 games.

Amir said he was grateful he had been handed a second innings in cricket. “It’s very difficult to get a second chance, so it’s a big thing from my country, officials and fans that they have given me another chance,” he said. “When my ban was relaxed I began playing club cricket. Imagine, for a person who had played at Lord’s, to play with a club team who didn’t have proper kit against another club team in Lahore. One of the three stumps was broken and we played with a Rs. 300 ball, but that match helped me concentrate on putting the bad times behind me.”

Also returning to the squad is fast bowler Umar Gul, who last played for Pakistan on the tour of Bangladesh in April 2014.