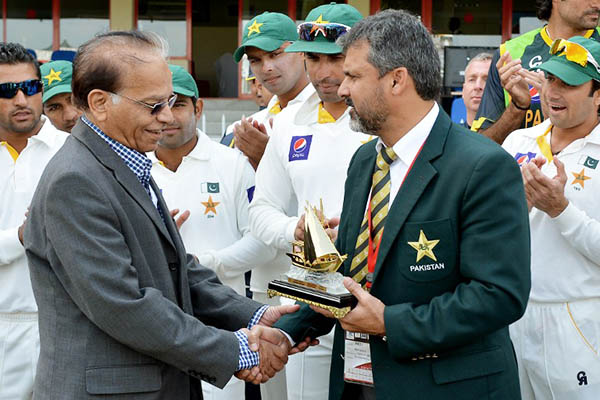 Khan, 42, was shortlisted along with another former captain and ex-coach Waqar Younis by a four-man committee, which included former captain Javed Miandad, Intikhab Alam and Wasim Akram earlier this week.

The decision came after a lengthy management committee meeting under the chairmanship of Najam Sethi, who replaced Zaka Ashraf on Monday. The decision comes as a blow to Younis who was regarded as favorite to regain the post he left in 2011 but Ashraf’s sacking led to him not being selected.

Pakistan Cricket Board (PCB) chief operating officer Subhan Ahmed told reporters Khan will coach the team for this month’s Asia Cup and next month’s World Twenty20—both to be held in Bangladesh. “Khan has been appointed head coach on the recommendations of the coach committee and since we have no cricket until October this year we will review his contract after the two tours,” said Ahmed, the fourth member of the coach committee.

Khan said his top priority is to help the team defend the Asia Cup title it won in 2012. “It’s a big honor to coach the team,” Khan said. “It’s a also a big responsibility and I would like the fans to support me. The first task is to win the Asia Cup.” Khan, under whom Pakistan won the first of two Asia Cup titles in 2000, added: “We will do our best to lift the performance.”

Khan played 69 Tests and 219 one-day internationals for Pakistan in the 1990s and 2000s. He has also coached the Pakistani and Indian domestic teams but never an international team. Khan has been team manager since July this year. Former paceman Zakir Khan, a director in the PCB, takes over as manager for the two tours. Pakistan had former Australian batsman Whatmore as head coach from March 2012 to last month.