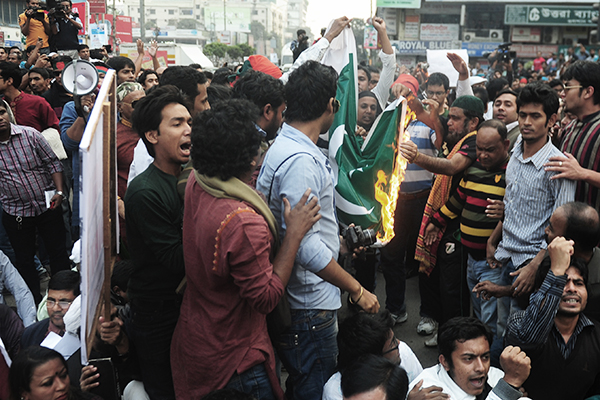 Chaudhry Nisar Ali Khan is in the wrong.

Pakistan did right by Bangladesh many years ago by recognizing it, by inviting its leader Sheikh Mujibur Rahman to Pakistan in 1974, and by finally making public the Hamood-ur-Rehman Commission Report, which documented Pakistan’s blunders in 1971. So then what was Chaudhry Nisar Ali Khan, Pakistan’s interior minister, doing by nearly condemning Abdul Quader Molla’s execution?

Based on what we know about the war-crimes tribunal in Dhaka that convicted Jamaat-e-Islami leader Molla for crimes he allegedly committed during the 1971 civil war that saw East Pakistan become Bangladesh, several questions come to mind. Was the tribunal up to international standards and expectations of justice? Was hanging Molla the best way to heal wounds in a divided and bitterly polarized Bangladesh? Was due process sacrificed at the altar of Bangladeshi politics? These are valid questions that require honest answers. But such answers should come from Bangladesh itself—not from outsiders, least of all from Pakistanis.

Coming to terms with ugly historical events is never easy. Nations linger over these matters for years. There are two ways of dealing with such issues: through reconciliation or through retribution. Equally, where outside powers were involved—as in the case of the 1937 Nanking massacre of Chinese civilians by invading Japanese forces or the excesses of Japanese colonization against the Koreans—the process of reconciliation can take decades. These matters are often never settled with finality, and begin to fade away. However, politics has a way of resurrecting long-buried issues.

We should not expect something different between Pakistan and Bangladesh. Even though the Pakistani state and its society have, at various levels, accepted the injustices inflicted on the people of East Pakistan through united Pakistan’s brief history, questions about 1971 keep cropping up. War crimes were committed by all sides, including the Pakistan Army. This is not in dispute; what is at issue is the magnitude of the atrocities. In Dead Reckoning, Sarmila Bose debunks some myths about Pakistani atrocities and includes crimes perpetrated by Bengali freedom fighters and the Indian Army. In Surrender at Dacca, former Indian general J. F. R. Jacob also documents the wrongs done by his country in 1971.

The findings and accounts of historian Bose and eyewitness Jacob are one thing, the Bangladesh shaming by Pakistani politician Khan quite another. “It was the demand of international relations, for solidarity of the Islamic Ummah, and of wisdom that events of the past [are] put behind, and a new era should be started,” lectured the interior minister in the National Assembly recently, according to state-run wire service Associated Press of Pakistan. Molla, said Khan, was punished for being loyal to Pakistan. That was precisely the problem, Dhaka can easily argue. Khan also made two other incredible statements. One: that every Pakistani was sad over Molla’s hanging; and two: that many people are calling his a “judicial murder.”

Khan should have left criticism of the war-crimes tribunal to the professionals. Human-rights groups around the world have questioned the trials. His first plea—that Bangladesh must forget the past of 1971, not seek vengeance, and simply move on—is astonishing for its lack of self-awareness. After all, it is Khan who is leading the treason charge against Pakistan’s former strongman, Pervez Musharraf, for imposing a short-lived state of emergency on Nov. 3, 2007. Musharraf, of course, stands accused of far less than Molla. Lest we forget, it was Musharraf who, as president in 2002, apologized to Bangladesh and left a handwritten note at the Savar war memorial: “Your brothers and sisters in Pakistan share the pain of the events in 1971 … The excesses committed during the unfortunate period are regretted. Let us bury the past in the spirit of magnanimity. Let not the light of the future be dimmed.”

Khan is the last person who should be tutoring others in forgiveness. What Mandela-like actions has Khan himself taken to presume to instruct Dhaka about the virtues of national reconciliation? How nations treat those they identify as criminals is their own internal matter, and Pakistan is the last country Bangladesh wants unsolicited advice from. How could Khan be so tactless? Did he say what he did because it would resonate with the Jamaat-e-Islami in Pakistan and in Bangladesh? Is this what he thought voters wanted to hear? When he said the Molla hanging was an “effort” to “revive old wounds of the past,” whose wounds was he referring to?

There is no place in the business of state for one’s apparently personal sadness over Molla’s hanging or the stormy rhetoric of political rallies. The complex business of state requires discipline, competence, and sobriety. People like Khan are influential because of the office they occupy. Their words and deeds affect millions—in Pakistan, and beyond. We look to these elected representatives to give coherence to the mess that surrounds us. Unfortunately, Khan proves that from whom better sense is expected, the biggest disappointments flow.

The above piece is senseless & nothing other than a bunch of crap. Writer is nothing other than pseudo intellectual who wants to keep separate the Pakistan from those who are alleged on the basis of Pakistan. This is the problem of English press they never be the spokesman of common Pakistanis.

It is really astonishing that the JI narrative is gaining traction in Pakistan. The Khans of opposition as well as of treasury are the visible apostles. JI understandably is too intrasigent to apologize but it is amazing that what copmelled Khans to toe the political lines drwan by JI. I feel that it is nothingh but dictates of realpolitik to play with emotions to establish patriotic credentials. In simple words it is an attempt to deceive the people. Hats off to learned author for implicitly urging super patriots to mind their own internal business.

I think that the use of words in the resolution is wrong. But Pakistan should raise their voice against this injustice. If Bangladesh is considering yourself as enemy why you are so humble with Bangladesh.Pakistan could use this incident in Cricket diplomacy and threaten to boycott the T-20 world cup because of unfavourable condition for Pakistan in Bangladesh

FYI Bangladesh is a sovereign country and not a province any more. Is it IK interfering in the internal matters of Bangladesh or is it otherwise?
Pakistan can try bycotting Bangladesh in sports arena. They will only isolate themselves.

Pakistan is already isolated and begger country.so we are not chooser

We should not have gone all the way to passing a resolution in the National Assembly. But Govt of Hasina Wajid deserves to be criticised for executing a man just to get political mileage, and that too after questionable legal proceedings.

If atrocities were committed, and indeed they were committed, then there had to be either retribution or some form of ‘truth and reconciliation’ as in S. Africa. Retribution applies to all parties guilty. It may be argued that some parties were more guilty than others but after the war ended, none opted for retribution because they would been implicated to some degree. India and Bangladesh agreed to release Pakistani PoWs and to not try them for alleged war crimes. Both those countries understood the implications of the step.

This was a conciliation of sorts but it was not accompanied by telling of the truth. Had truth been told then, it would have still taken a lot of time for old wounds to heal. Perhaps they would never had healed completely. But I think it would have been less likely in those circumstances for some third rate politician to get an opportunity to reignite fires of hatred for political gains.

So there is nothing wrong with criticising Hasina Wajid govt over this decision, which has questionable legal basis anyway. Just recall how many world leaders and heads of states criticised Gen Zia for executing ZA Bhutto. But that was a criticism of Gen Zia, not Pakistan and they did not pass resolutions in their assemblies. Likewise we should criticise the Bangladeshi politician. But when we pass a resolution in our national assembly, it seems that we are criticising Bangladesh for what it is, and that we are unwilling to even acknowledge the wounds that were inflicted on their people.

Ms. Nasim Zahra is an accomplished media person. Here she makes a classic mistake: focusing too much on what WE did wrong that led to the debacle. And we did plenty of wrong. But the viewpoint she puts forth here is not the last word. Abdul Quader Mollah knew that Pakistan was defeated four decades ago. Yet he refused to condemn Pakistan, stood by the country he defended during the Indian invasion of 1971, and died leaving an amazing example of loyalty to Pakistan. Islamabad’s ruling elite, if they have any sense of nation-building, need to embrace this example. The argument that Pakistan is meddling in Bangladesh is also wrong. The (mis)-trial of Mollah involved the government of Hasina Wajid promoting deep anti-Pakistanism. She and her supporters used the trial to put Pakistan itself on trial and twisted and misrepresented many details of that war. It becomes imperative for Pakistan to make itself heard and protest this unwarranted demonization. Hence, the parliamentary resolution was the bare minimum that Pakistan did to protest this deep anti-Pakistanism that Hasina’s govt demonstrated. A more detailed perspective has also come from Mr. Ahmed Quraishi, a columnist for The News International, in his op-ed, Indira’s War. You should check it out. Link http://j.mp/1bQfKLt

There is stupid and stupider. Unfortunately this Resolution and the two Khans’ knee jerk reaction is both. It has nelped neither the cause of the Jamaat e Islami in Bangladesh or the Bangladesh National Party who are the real targets of Hasina Wajid’s ire. Additionally by our meddlling we have now weakened the case of the other 5 defendants on death row. The courts in Bangladesh will feel justified to dismiss the review petitions of these appeals once Mrs.Wajed returns to power on January 5th. With anti-Pakistan sentiment orchestrated through hot-heads of the Shahbagh movement, a further crackdown on the BNP and the JI as ‘anti-national elements’ will probably ensue. With friends like these, who needs enemies!

if west pakistan had done some wrong then now bangladesh is doing the same things. loss of cricket events in future will shake them