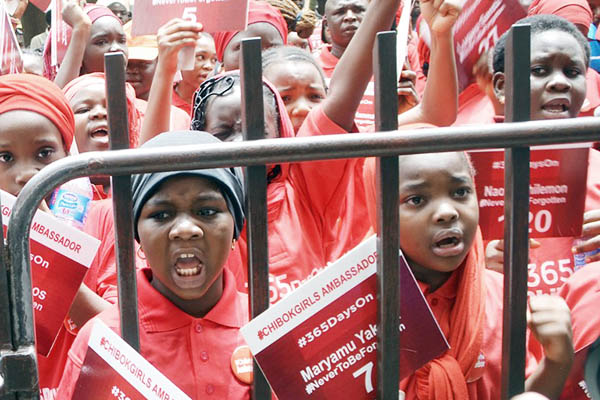 At least three women were killed in a landmine explosion and others crushed to death by tanks as Nigeria’s military moved in to rescue them from Boko Haram, one freed hostage said on Sunday.

The deaths happened in the Islamists’ Sambisa Forest stronghold, from where soldiers have freed hundreds of women and children seized during the bloody insurgency in Nigeria’s northeast. The military said on Sunday that 275 women and children had been taken to a relief camp in the Adamawa state capital, Yola.

More than 700 women and children have been found in the dense forest over the past week, raising hopes the 219 girls snatched from their school in Chibok, Borno state, in April 2014 were among them.

The teenagers’ plight caused global outrage and brought unprecedented world attention on the conflict, which has left at least 15,000 dead and made some 1.5 million homeless since 2009.

Nigeria’s National Emergency Management Agency (NEMA) said the 275—some of them traumatized and malnourished by their ordeal—would undergo “rehabilitation” in Yola, including trauma counseling.

“Eight women and 15 children have been taken to the hospital for treatment for injuries they sustained during the rescue operation,” said spokesman Sani Datti.

Binta Abdullahi, who was kidnapped from a village near Madagali, in the north of Adamawa, more than a year ago, described the hostages’ ordeal as the soldiers moved in. “When the military stormed the camp where we were being held, our captors told us to take cover under trees and shrubs to avoid military shelling,” the 18-year-old told reporters in Yola. “Some women who hid under trees were crushed by military tanks which mowed them down without knowing they were there. After soldiers subdued Boko Haram fighters and rescued us they loaded those too weak or sick to trek into vehicles and asked the rest of us to walk behind… to avoid stepping on land mines planted by Boko Haram all over the place. At least three women and some soldiers were killed when a mine exploded after a woman stepped on one.”

Boko Haram has used kidnapping as a tactic throughout the past six years. Amnesty International said last month more than 2,000 women and girls have been seized since the start of last year.

Abdullahi said she was held in two places before being moved to Sambisa last month, including Boko Haram’s “headquarters” in Gwoza, from where the Islamic State group affiliate declared a caliphate last year.

Her two sisters, who were also kidnapped, managed to escape but she stayed as she was looking after three children, aged four and three, whose mothers were not among those kidnapped. “I couldn’t leave them,” she said.

Her testimony chimed with that of other former hostages, who described forced labor, marriage, sexual and psychological abuse by their captors, as well as being compelled to fight on the front line.

“They asked us to marry Boko Haram members but we told them there was no way we could get married because we were already married to our husbands,” she said. “They said since we would not marry them they would sell us as slaves at the right time.”

Lami Musa, 19, was four months’ pregnant when Boko Haram fighters stormed her village of Lassa, near Chibok, five months ago. She said she was not married off because she was pregnant but was told she would be after she gave birth. “Fortunately I was rescued a day after giving birth. I thank God,” she added.

The authorities in Yola have recorded the former hostages’ personal data, including their names, age, and place of origin, according to NEMA’s Datti. But how long they will remain in the camps is unclear. Earlier this year, nearly 200 women released by Boko Haram were held in a government camp in Yobe state for more than a month.

“Most of them looked tired and traumatized. They were unkempt. From their looks they haven’t had a bath for days,” said Datti.

The women and children were provided with food, mattresses, blankets, mosquito nets, soap and detergents.

Nigeria’s defense headquarters said on Sunday 260 women and children who were stranded after fleeing a Boko Haram attack had been located in Adamawa and returned to their communities in Madagali.

President Goodluck Jonathan’s handling of the Boko Haram crisis was seen as a key reason for his election defeat and the recent military successes, while welcomed, viewed as too little, too late. Jonathan hands over power to former military ruler Muhammadu Buhari on May 29, having pledged to defeat the militants.