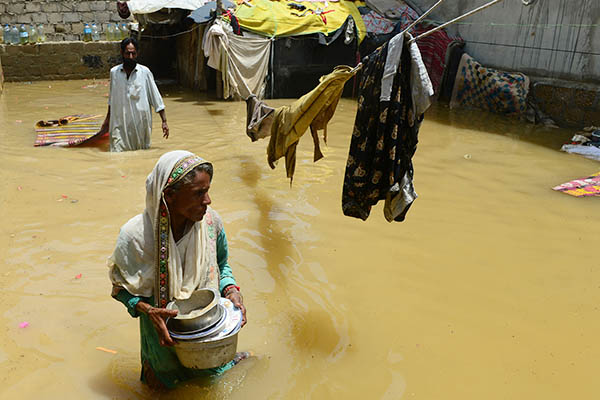 Monsoon rain and floods have killed at least 58 people across Pakistan and affected tens of thousands of others, officials said Monday, warning of more rain to come.

“At least 58 people have died, more than 30 others were injured and 66,000 were affected by rain and flooding in Pakistan since July 31,” Brig. Mirza Kamran Zia, operations chief of the National Disaster Management Authority (NDMA), told reporters.

Zia said floods were receding and people were returning to their homes, but he warned that more rain than usual was expected this month and next.

NDMA chief Maj. Gen. Muhammad Saeed Aleem said the recurring flooding was the result of global climate change. “Unexpected rains are global climatic change phenomena, but we can prepare and plan ahead to mitigate the disaster,” Aleem said. “We are worried about central Pakistan this year, where more rain and flooding from hill torrents is expected,” Aleem said.

Flash floods following monsoon rain paralyzed parts of the largest city Karachi at the weekend. Authorities in the city of 18 million people, which contributes 42 percent of Pakistan’s GDP, said it would take more than two days to clear up after the water flooded markets, buildings and houses and blocked roads.

Hundreds of cars were half-submerged after poor sewerage and drainage systems became blocked due to garbage.

In the northwestern province of Khyber-Pakhtunkhwa, homes were swept away.

Pakistan has suffered devastating monsoon floods for the last three years, including the worst in its history in 2010 when catastrophic inundations killed almost 1,800 people and affected 21 million.