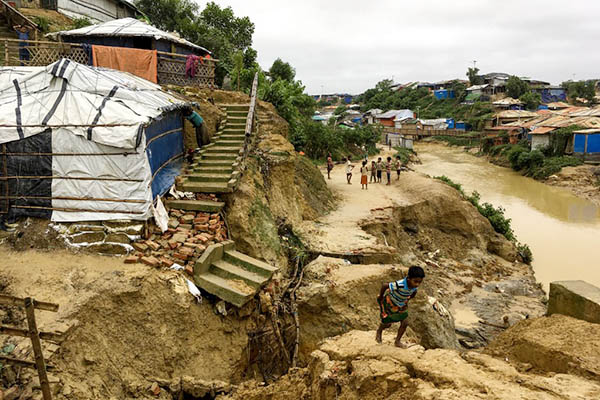 At least 10 people have died and thousands of shanty homes have been destroyed by monsoon rains in overcrowded Rohingya refugee camps in Bangladesh’s southeast, officials said on Sunday.

Bangladesh’s meteorological department said the Cox’s Bazar district—home to nearly one million Rohingya Muslims who have fled a military crackdown in Myanmar—has seen at least 58.5 centimeters of rain since July 2.

An International Organization for Migration (IOM) spokeswoman said heavy rains triggered mudslides in the refugee camps—which are mostly built on hill-slopes—destroying some 4,889 tarpaulin and bamboo shacks in the first two weeks of July.

More than 200 landslides have been reported since April in the camps, built near the border with Myanmar, and at least 10 people were killed, a U.N. report said, adding nearly 50,000 people have been affected. In the last week alone, two Rohingya minors died and another 6,000 people were left without shelter because of heavy rains.

The U.N. said the schooling of some 60,000 children had been interrupted with over 750 learning centers partially damaged and five heavily damaged.

Displaced refugees said they were suffering as rain disrupted logistics and daily activity in the camps. “It’s tough to go to food distribution centers by wading through a swamp of mud,” Nurun Jan, a Rohingya refugee, told AFP. “Rains and gusty wind have made our life miserable.”

Refugees also described a shortage of drinking water and a looming health crisis due to flooded toilets, which foster disease outbreaks.

World Food Program (WFP) spokeswoman Gemma Snowdon said they had to significantly increase assistance in the camps to cope up with the monsoon. “So far 11,400 people have required the extra food assistance due to the heavy rains, compared to 7,000 during the whole of July 2018,” she said.

Last year the U.N. refugee agency moved 30,000 Rohingya out of areas considered at high risk of landslides and floods.

Heavy rains frequently trigger flooding and landslides in Bangladesh’s southeastern hill districts, and in 2017 at least 170 people were killed.

Some 740,000 Rohingya fled a military crackdown in Buddhist-dominated Myanmar’s Rakhine state in August 2017, joining about 200,000 already living in camps in Bangladesh. Officials said landslides were increasing in the region because forests had been cleared to make way for the sprawling Rohingya camps. One of the settlements, Kutupalong, is now the world’s largest refugee center.

Refugee homes are particularly susceptible to damage or destruction because Bangladeshi authorities will only allow them to be built with tarpaulin, twine, bamboo, or other flimsy materials to maintain the “temporary” character of the camp, according to the New York-based Human Rights Watch (HRW).

A senior Bangladesh official told AFP the government has barred permanent structures as they hope the refugees will eventually return home.

Bangladesh wants to relocate up to 100,000 refugees to Bhashan Char, a remote island in the Bay of Bengal, but this is opposed by the Rohingya and international rights groups. Dhaka says any relocation to the island would be voluntary.