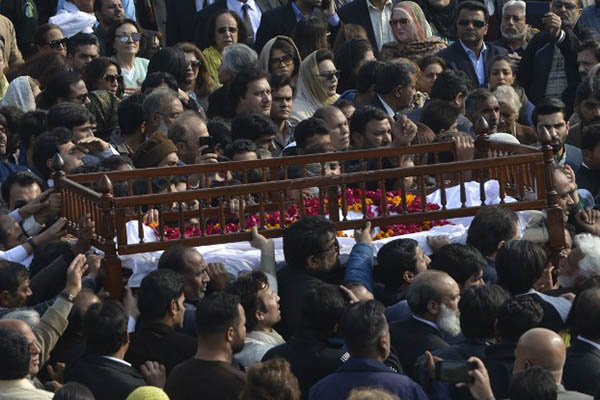 Human rights campaigner who passed away over weekend buried in Lahore

Pakistan bid farewell to top rights advocate Asma Jahangir on Tuesday, with thousands cramming into a major cricket ground under tight security to grieve the woman described by many as the country’s “moral compass.”

Jahangir, who died of cardiac arrest on Sunday aged 66, was a lawyer who co-founded the Human Rights Commission of Pakistan and also served as United Nations Special Rapporteur on human rights in Iran. She was widely admired in the international humanitarian community and was seen as a champion of the downtrodden in Pakistan, which has a troubled rights record, especially for minorities.

Newspaper front pages have been dominated by accolades to “Asma the fearless,” while social media has seen a tsunami of acclamations, with many questioning what Pakistan will do without her.

Jahangir faced death threats, beatings and imprisonment to win landmark human rights cases while standing up to dictators. The rights commission which she helped create made its name defending religious minorities and tackling highly charged blasphemy accusations along with cases of “honor” killings—in which victims, normally women, are murdered by a relative for bringing shame on the family.

A fair synopsis but an article of this length can never capture the essence of this larger than life, multi-faceted woman whose multitude of humanitarian achievements including changing attitudes to obsolete, medieval traditions and to patriarchal authority have changed the lives of Pakistani citizens for the better. Her notable legal victories are her lasting legacy to non-discriminatory jurisprudence.
A unique personality who made a difference.

“Asian Joan of Arc’ is how an Indian daily aptly described her. Her life was a journey in search of justice. and liberty for all. A legend who will inspire a new generation of crusaders for human values.