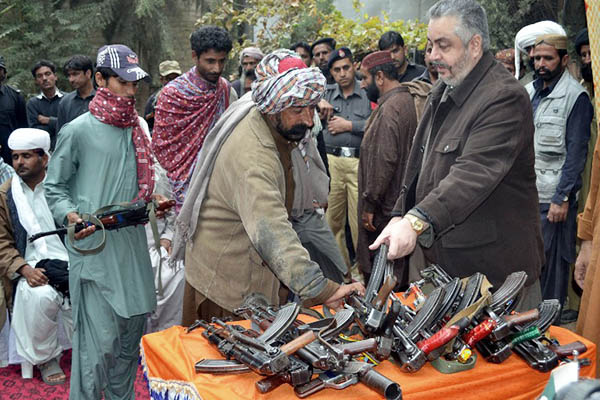 BLA and UBA militants surrender to authorities, who say they will brought into mainstream and given jobs.

Thirty Baloch rebels and two commanders on Thursday surrendered to the Pakistan authorities, a provincial government minister said, the latest insurgents to lay down their arms in troubled Balochistan province.

The 32 militants were from two separatist groups, the Baloch Liberation Army and the United Baloch Army, which have long been fighting government forces in gas rich Balochistan, which borders Iran and Afghanistan.

“The militants pledged their allegiance to [the] state of Pakistan and declared that they would not take arms in future against their own country,” provincial minister Nawab Changaiz Marri said at a ceremony held in Quetta to mark the occasion.

Marri, who is also chief of his Marri tribe, said the government would bring these men into the mainstream and give them jobs. “We have been misled and asked to fight against our own country which was wrong,” said one of the two commanders, Marjan Khan, who handed over their weapons.

The authorities have long been negotiating with militants to lay down their arms. In June more than 100 militants surrendered and pledged their allegiance to the country.

Resource-rich Balochistan is the largest of Pakistan’s four provinces, but its roughly seven million inhabitants have long complained they do not receive a fair share of its gas and mineral wealth. Rebels began their fifth insurgency against the state in 2004, with hundreds of soldiers and militants killed in the fighting.