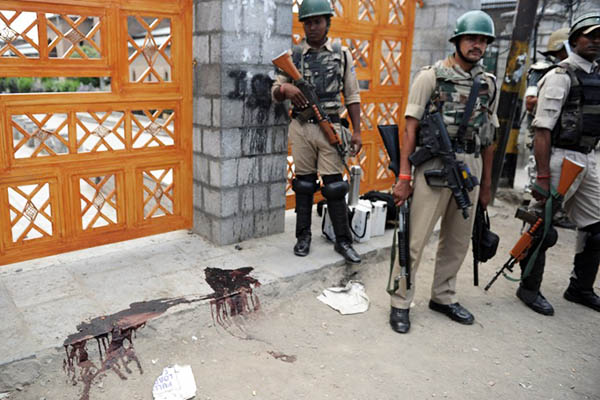 Latest round of gun battles comes on India’s Independence Day.

A paramilitary police commander was shot dead in India-administered Kashmir’s Srinagar while four suspected separatist militants were killed in gun battles on Monday as violence flared in the disputed Himalayan region on India’s Independence Day.

The commander was critically injured in an ambush in Srinagar’s Nowhatta locality and later died in hospital while two militants were killed in a shootout that followed the attack, an officer of India’s Central Reserve Police Force (CRPF) told AFP. “We have lost a commanding officer. Two militants were also killed in the ensuing gunfight,” said Atul Karwal, the force’s inspector general in the region.

He said nine others were injured after coming under fire during a patrol, including two local policemen who were in a critical condition at a hospital. The officer could not immediately confirm the identities of the slain militants but said they were “non-locals,” usually a reference to Pakistani nationals.

Authorities have imposed a curfew in large parts of India-administered Kashmir, India’s only Muslim majority state, since July 9 following an upsurge in violence sparked by the killing of a top militant commander called Burhan Wani in a gunfight with security forces. More than 50 civilians have been killed in clashes between protesters and security forces, and thousands more injured in the region’s worst violence since 2010.

In a separate gunfight on Monday, two militants were killed near the Line of Control—the de facto border between India and Pakistan—in the northern Uri sector, an Indian army spokesman said. S. D. Goswami said the militants sneaked over onto the Indian side but were challenged by border guards who killed them in a gunfight. Their bodies have been recovered.

Kashmir has been divided between India and Pakistan since the end of British colonial rule in August 1947 but both claim the territory in full. It is the epicenter of a separatist insurgency, with several rebel groups fighting Indian troops and police as they seek either independence or a merger with Pakistan.

The state’s first woman chief minister Mehbooba Mufti called on India and Pakistan to make the Line of Control irrelevant to bring peace in the region. “I appeal to both countries that this line dividing Kashmir should be made irrelevant,” Mufti told a thinly attended gathering at a sports stadium in Srinagar. She blamed the Indian leadership for the current crisis in the region and appealed to protesting youths to return to their schools and colleges.

The main event at the fortified arena was marred by spectators booing the chief minister after the Indian flag fell to the ground as she tried to hoist it, prompting authorities to order a probe to determine if it was the result of an act of sabotage.

Indian Prime Minister Narendra Modi made no direct reference to the situation in India-administered Kashmir in his annual Independence Day speech but made a general appeal for an end to violence, adding that India “will never tolerate terrorism.”