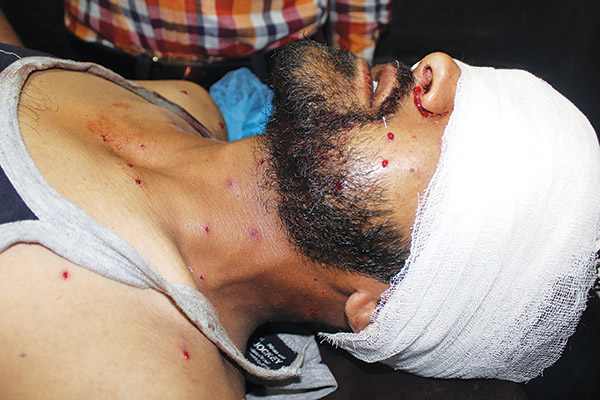 But while the content was hard-hitting, Lodhi waved a picture of a girl whose face bore the marks of pellet hits from a pellet gun, a device extensively used by Indian security forces against protesting Kashmiris. Its use has been widely condemned not only by rights organizations internationally but also within India. Hundreds of Kashmiri men, women, boys and girls have either been partially or fully blinded, or their faces disfigured by pellets.

There’s no dearth of pictures of Kashmiri victims. The incidents have been painstakingly recorded by journalists and rights activists in Kashmir, as also outside India. Yet, the picture shown by Lodhi apparently was of a girl from Gaza, another land occupied and brutalized by India’s close friend, Israel, and from whose experience of oppressing Palestinians India has learnt a lot.

It was gross incompetence. Since it is unlikely that Lodhi was scouring for pictures when prepping the reply, it was quite likely someone in the mission, as ‘savvy’ digitally as this writer, who picked up the picture without verifying its provenance and turned the occasion into a snafu.

That does not take away from the facts of the case against India but it gave Indian social media trolls, usually right-wingers, a great opportunity at whataboutery. Nothing surprising about that. Barring honorable exceptions, the common Indian’s conscience has been long dead when it comes to Kashmir.

Even so, the incompetence at our end remains inexcusable, not just because our mission couldn’t find one picture when there are literally hundreds available, but because it is symbolic of Pakistan’s shambolic Kashmir policy. It is irony at its deepest when a country that erects its entire foreign policy on the K-pillar cannot get even its basics right about that pillar.

I have written this before but I will say it again: Pakistan, for all its sweat and blood, has done more harm than good to Kashmir and the Kashmiris.

Foremost, the issue has become a dispute between Pakistan and India with Kashmiris pushed to the back. Corollary: international attention has moved away from the central issue, i.e., Kashmiris’ right to self-determination, their movement as an expression of what they want. It matters nothing if Pakistan, pro forma, continues to parrot the line about self-determination. It means zilch until Pakistan recognizes Kashmiris as the central party and allows the movement to take its own course.

Here’s what a Kashmiri wrote me: “Ejaz sb…Pakistan will do [the] Kashmir cause and [the] Kashmiris great favor if it lets them represent themselves at world fora. Poor us. Either it allows terror morons to hold big rallies in our name or has incompetent civil servants [who] in this day and age… can’t get a picture right, that too at the highest debate forum in the U.N. Forgive me for my rant, but can someone stand up and beg Pakistan to do the right thing?”

On Feb. 6 this year, I wrote a piece in this space, titled, Time for Change. It was largely adapted from a presentation I gave at the National Defence University in Islamabad. What I had to say, and did, did not amuse the khakis. Their displeasure of course means nothing for me (to be an equal-opportunity offender one needs to develop thick skin), but it gave me additional insight into how bankrupt our thinking is on the issue of Kashmir and which has in truth, for all our huffing and puffing, left the Kashmiris bereft.

“It’s somewhat easy to answer these questions: Kashmiris are no closer to achieving independence/freedom. Repression and systems of hegemonic control have increased in Kashmir over time. Internationally, the Kashmiri struggle is seen as being caught up in the India-Pakistan conflict, rather than as legitimate in its own right. At worst, the Kashmiris’ struggle has been associated with extremism.”

What should be the policy thrust: focus on Kashmiris and let them take the lead. Frame the question of the future of Jammu & Kashmir in terms of high principles and international norms vis-à-vis self-determination, not as a real estate dispute. Avoid doing anything that shifts attention away from Delhi’s oppression and bad faith. Adopt a strategy whose destination is a solution of Kashmir that is acceptable to all parties and in shaping which the Kashmiris have a primary role. Do not do anything that allows India to shift the focus from self-determination to ‘terrorism’ and ‘extremism.’ Make it about Kashmiris, not an India-Pakistan dispute.

The realist framework looks at states and their interactions in terms of relative power. India is managing to hide behind its image. Kashmir is the picture in the cellar. Upstairs resides Dorian Gray, ‘handsome’ and ‘youthful’, his sickness and reality borne by the picture away from the world. The challenge is to get the world down in the cellar, pull the picture upstairs and put it on display.

The current (non)policy has no chance of winning that challenge.

Dear Ajaz Sb. Your argument makes sense but any change or redifinition of the stance on the issue is likely to be exploited by India given its media and diplomatic clout. Agreed that our Kashmir approach suffers from incompetent handling and frankly speaking non serious and Military-dependency. Indian over and underhand machination with shrewd diplomacy outsmarts Pakistan despite all credit in thr case. Academia and intelligentia will have to take lead now to best serve the cause in face of all external and internal odds. Using of proxies has gain precedence particularly under Nuk Overhang… Pakistan has to trade in coin and currency that has value. India is unlikely to prey to any soft or benign approach how smart it may be. Therefore, a comprehensive approach employing all means hard and soft may attract the world attention…
In present geopolitical environment, in my reckoning leaving Kashmir Cause to the Kashmiris alone will not be consequential and is likely turn the tide in Indian favour.
However, I value your heartburn and search for innovation with no solution in sight.
Best Regards

My goodness! What a morbid analysis and selfish outlook Ghulchin Sb. This is the dilemma of having fools as so-called friends. Please forgive my description but why don’t you understand that Kashmir isn’t the property of India or Pakistan and there are real human beings living there for thousands of years, who have a documented history and are sick and tired of being a contest between India and Pakistan?

You’re on the right track. Let’s simplify the equation: 0% Pakistani interference in any part of the erstwhile J & K = 100% gains for the whole neighbourhood (including Pakistan).

You said right thing but who cares to your point of view in pakistan..kashmire yet not understand that global scenario has been changed..now islamic terrorists have not asset but they r burden..but still Pakistan is in fool paradise..cheeriing kashmir banega Pakistan..entire world Loughing at ur country..

On top of all, an officer in Parep UN proudly took to twitter that PR, UN gave a befitting reply to Ms Swaraj by showing that Picture ! Give me a break

Dear Ejaz Sahib, I fully agree on need to be innovative on Kashmir. Had been thinking on that for sometime, as a student. Would you please help me by listing down a set of measures which should be Pakistan’s Kashmir policy, taking into account all possible angles realistically. Secondly, I couldn’t understand the necessity to highlight that ‘displeasure of khakis means nothing for you’. Perhaps, you talked at NDU, which is an academic forum essentially, any counter arguments should be taken in the same context. Regards