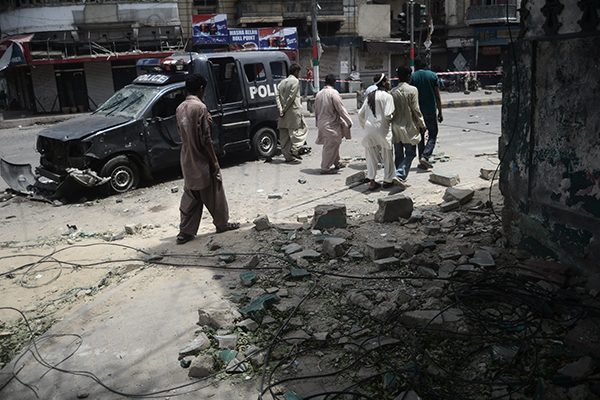 Welcome to the era of interactive complexity.

A strategy of terrorist strikes is the most effective tool in the kit of an insurgent-terrorist force and achieves multiple results. It makes counterinsurgency efforts look inadequate and raises questions about the use of force and its utility (“If military operations are going well, why do insurgents still have the capacity to attack?”). It creates a spectacle and makes the government look impotent. It also prolongs the conflict and, by doing that, induces mission fatigue in both the population and the counterinsurgency force. Urban terrorism instills fear among the population and puts pressure on the government to talk to the insurgent force, it highlights structural inadequacies (for instance, poor policing and institutional responses), and plays on political and ideological differences in society.

The insurgent force thus begins to look stronger than it usually is, and the government weaker than it actually is. Bodies piling up slowly over a long period of time have a psychological effect. One of the sub-principles of the principle of fighting among the people is to develop confidence in governmental action. The insurgent force retains its asymmetric advantage by undermining that effort.

The government side must, therefore, force the insurgents into making errors. Sir Robert Thompson, a British officer and counterinsurgency expert, calls it “playing for the breaks.” As I wrote for The Friday Times in 2009, “The ‘breaks’ refer to ‘changes in the situation at the international, national and local levels … generated by critical errors made by an insurgency’s leaders.’ These errors fall in two categories: original sins and situational errors. But errors made by the insurgents are not enough in and of themselves to put down an insurgency; they must be leveraged by counterinsurgency forces in their favor.” A good example of this is the run-up to the 2009 Swat operation and, later the same year, the South Waziristan ops. (See also Playing for the Breaks: Insurgent Mistakes, by Lincoln B. Krause.)

Even so, sustaining the advantage is difficult. Most counterinsurgency literature deals with foreign forces fighting insurgencies in another state in collusion with a local government.

The case of Pakistan is different in that Pakistani security forces are fighting indigenous groups on Pakistani soil. Usually, this should make things easier in terms of acquiring legitimacy for counterinsurgency operations. That has not happened. Why?

In the answer to this question lies not only the report card of this war but also the prognosis.

To establish the baseline, it is clear that Pakistani security forces are also fighting among the people. They are, however, fighting on their own soil and fighting their own people. The second principle deals with dislocating the insurgent-terrorist from the context that supports and strengthens him. This is where Pakistan’s peculiar problem begins. It is easier for the state to win against or at least contain effectively an insurgent force which is ethnically and ideologically a minority and is also confined to a specific geographic area. The state will still face many of the problems listed in the first part of this article and their consequences, as narrated above. However, it will be relatively easier for the state to isolate the problem. The Israeli strategy of walling out the Palestinians and profiling them for issuance of work permits is a case in point. Sri Lanka’s fight against the Tamil Tigers is another, though the conflict took nearly three decades to reach a point of uneasy peace with the Tamils using terrorism outside their geographic area. Still, there’s a degree of relative ease in such cases.

In Pakistan’s case, applying the strategy of dislocation is terribly difficult. This is owed to the fact that the perpetrators and perpetuators of violence are not only drawn from diverse ethnic and linguistic backgrounds but, despite belonging to different groups, share an ideology which acts as a binding force for the insurgency. Add to this mix the presence of foreign fighters, Al Qaeda elements, and Afghan insurgents and the situation becomes highly complex. Moreover, there is a full-fledged insurgency going on just west of Pakistan, which has direct and indirect linkages with the groups fighting within Pakistan. The communication revolution means these groups share best practices across national frontiers and have a combination of local and supra-state agendas.

It is easy to say that the state is not doing enough, that it is procrastinating or even that it is acting cowardly and not presenting a coherent ideological front. All such observations, albeit partially true, tend to completely miss the point that the state, while supra-society in some ways, is, in the end, nothing more than its people. If the state is considered to be a sum total of the organizations that comprise it, then we can apply organization theory to understand why states respond to situations in the way they do.

That essentially means, given the critique, why they do not respond in the very linear, clear-cut manner in which some critics in Pakistan would want the state to act—notwithstanding the fact that this situation is far from one that would allow a linear approach. So while one can understand the people’s frustration, it is difficult to sympathize with their simplistic narrative because it is not grounded in anything other than pious wishes and betrays a total lack of understanding of complex organizational processes. It is somewhat ironic that this superficiality (mis)informs much of the debate.

Put together the pieces and the mosaic becomes scary: the state’s own constraints versus a situation of multiple challenges. A situation in which sections of society agree with what the insurgent-terrorist groups are doing. To further complicate matters, many of those who are otherwise opposed to terrorism read its genesis and purport wrongly. (“This is a reactive war, this is not our war; this has been imposed on us by the United States. Once we get out of our alliance with the U.S., the country will become all nice and quiet. The groups are being supported by hostile agencies.”)

Terrorism in Pakistan is begotten of extremism. That is the biggest problem. And it makes dislocating and isolating the terrorist difficult. The responsibility, largely, is that of the state; it developed a societal mindset, using religion as the national narrative. Now that narrative has become a social reality and while the state has made an about-face, society is stuck in the past. People do not change overnight, just like they cannot be indoctrinated overnight. Yesterday, they were radicalized. Today we want to deradicalize them.

Take an example. A sectarian leader is killed. His followers take to the streets and instigate violence against the rival sect. Police are present, the laws against such actions are there, and yet nothing happens. Why? Because if you have thousands of people out there flouting the law, how many can be imprisoned, even killed? So, what does the state do? It tries to keep things under control, talk to leaders of all sects and keep the situation from getting out of hand.

It’s a short-term measure for sure and doesn’t take care of the problem. It empowers the very people who are the source of the problem. But what’s the alternative, short of dispatching millions of people to their Maker? Critics must criticize, but should equally be aware of the constraints in which the state has to operate.

Still, there are things the state can and must do. In the short term, it must enhance its firefighting ability. That involves the military and police, the latter more than the former. The state must understand that the role of the police is central to countering terrorism. The Army has a different job to do. Counterterrorism military operations cannot be a substitute for counterterrorism policing. The two have to complement each other. They do not stand alone. Urban terrorism can only be tackled by the police.

In the medium- to long-term, the state has to attempt to re-conceptualize itself and dominate the narrative. So far there has been no serious attempt to do that. There have been many plans, but implementation has been faulty and halfhearted. It will be easy to say that that must change. The fact is: it will change—but at a glacial pace.

The state faces a “wicked problem.” Horst Rittel and Melvin Webber’s 1973 paper for Policy Sciences, Dilemmas in a General Theory of Planning, states, “A wicked problem is generally one that is either difficult or almost impossible to solve because of contradictory and changing requirements and where information is incomplete. To add to the degree of difficulty, a wicked problem involves complex interdependencies, such that tackling one aspect of the problem can create other problems. Essentially, this means that no course of action can be based on a definitive formulation because a wicked problem successfully eludes one; courses of action cannot be correct or incorrect or true or false but only relatively better or worse; every attempt is a one-shot experiment which may or may not work; stakeholders have different frames for understanding and solving the problem; there are multiple value conflicts and so on.”

The problem, now generally referred to as “interactive complexity,” is increasingly being written about, not just in relation to public policy but also military operations in environments where the militaries have to fight “among the people.”

This, then, is where we stand. There are internal problems, as also external forces at work. The situation is being dealt with and will be dealt with in and through the constraints that inform the state’s functioning as also state-society relations. There is no magic wand, whether we fight or talk or do both. It is important to criticize and analyze but there is no use doing so without a clear understanding of the multiple complexities.

Welcome to the era of perpetual conflict.

Ejaz Haider as usual missed the forest for the trees. The simple fact is that the insurgency is kept alive, because the Pakistani Army wants to use the insurgents to destabilize Afghanistan & Kashmir and extend their influence there. Since the insurgents want in turn to have more influence in Pakistan, they use the same tactics of attacking civilians to achieve their goals here.
The current talks with the TTP just hope to achieve a detente where attacks on the Army are off limits. The civilians are dispensable and there’s lot more of them where they come from.