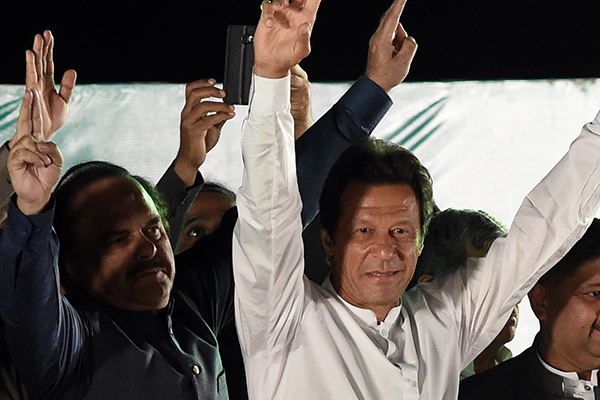 Tensions among politicians mounted at the start of the week, leading to explosions of anger between the contesting parties, which is normal, and also within parties, which is the new normal. While the Pakistan Tehreek-e-Insaf’s Shafqat Mehmood and Pakistan Muslim League (Nawaz)’s Pervaiz Rashid exchanged insults on a TV talk show, PTI’s Shah Mehmood Qureshi and Muhammad Sarwar quarreled over their party’s strategy in Sindh and abused each other during a dinner in Islamabad, forcing PTI chief Imran Khan to leave in disgust.

More heat has been produced by the exhumation of a case of loan write-off against the PTI central organizer Jahangir Khan Tareen which he has rebutted as a false report. The International Consortium of Investigative Journalists (ICIJ) says another 400 politicians and businessmen would soon be named in another list of offshore “crooks” as part of the Panama Papers. Another PTI billionaire Aleem Khan is accused by the PMLN of undervaluing his wealth before the Federal Board of Revenue by hiding half of it. In South Punjab, the news is that Chotu Mazari, the dacoit arrested through a special police-Army operation, is spouting names of politicians who backed the depredations of his gang since 2005.

The Pakistan Peoples Party continues to be under pressure since the arrest of Uzair Baloch, the Lyari dacoit who literally ruled Karachi before the Rangers stepped in against terrorism. More “China-cutting” scandals and extortions are being unearthed on a daily basis, and criminals formerly belonging to the PPP and the Muttahida Qaumi Movement are being picked up. The MQM, under some pressure from the breakaway Pak Sarzamin Party, is suffering a steady stream of arrests exposing its old nexus with the Indian intelligence agency RAW.

In the middle of this chaos, a Pakistani reporter working for the ICIJ has revealed that “due to an editing error, a sentence in an earlier version of this story implied that the prime minister of Pakistan controlled an offshore company that appeared in the Panama Papers. It is his children who control the offshore companies.” It had originally stated: “The files exposed offshore companies controlled by the prime ministers of Iceland and Pakistan, the king of Saudi Arabia and the children of the president of Azerbaijan.” This will stoke further the war of words now going on instead of dousing it.

The MQM is clearly split; the PPP is at a low point in the country and open to shifts of power within. The PTI has been subject to internal upheavals and now has a sizeable original membership disgruntled with Khan’s style of running the party. However, Khan is aware of this structural weakness and wants to take full advantage of the Panama Papers scandal to oust Prime Minister Nawaz Sharif from power before the 2018 elections. Jamaat-e-Islami, the only religious party out in the open against Sharif, is risking its future by riding the Go-Nawaz bandwagon. As they appear to hunt for the corrupt, Pakistani politicians risk damaging the national economy already in trouble because of the collapse of its state-run sector.