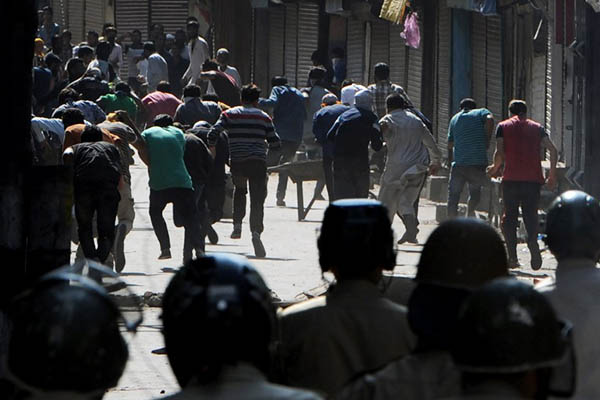 Death toll rises to 52 with nearly 4,000 injured as protesters clash with security forces.

Fresh clashes erupted between security forces and mourners on Wednesday in India-administered Kashmir after two more civilians were killed in the restive region, a police officer and an AFP photographer said.

Paramilitary forces fired tear gas and pellet guns at angry mourners gathered near Pampore town for the funeral of a resident shot dead the day before, the unnamed officer said. “Thousands of people gathered in the area and many from other areas crossed the river avoiding restrictions. Now we have clashes after the young man was buried,” said the local officer, who is not authorized to speak to media.

The resident was killed on Tuesday night when the bodyguard of a top district administrator fired his service weapon at protesters who had stopped the pair’s car, witnesses said. The demonstrators had blocked the main highway, angry over alleged police raids on mosques in the area, the witnesses added.

“One protester died in the shooting and another was critically wounded,” said deputy inspector general of police for the area, Ghulam Hassan Bhat. With the latest shooting the death toll reached 52 in ongoing anti-India protests in the disputed territory and clashes with government forces that have also left nearly 4,000 injured.

In a separate incident, a security guard of a bank ATM also died on Tuesday night when he was driving his scooter to work in Srinagar. Doctors at the main hospital in Srinagar, speaking on condition of anonymity, said he had been shot with a pellet gun from close range.

Mourners for the ATM guard shouted anti-India slogans and clashed in Srinagar with security forces, an AFP photographer on the scene said. “We are receiving a number of people injured with pellets,” the same doctor at the SMHS hospital said of those clashes.

The killing of a young and popular rebel leader, Burhan Wani, on July 8 in a firefight with government forces sent the region spiraling into daily protests against Indian rule and clashes with government forces. The region has remained locked down since, as separatists opposed to Indian rule called for strikes and protests and authorities responded by suspending most mobile networks and Internet and clamped rolling curfews in large parts of the territory including Srinagar.

Kashmir has been divided between rivals India and Pakistan since the two gained independence from British rule in 1947. Both claim the territory in its entirety. Several rebel groups, including Wani’s Hizbul Mujahideen have fought for decades hundreds of thousands of Indian forces deployed in the territory, demanding independence for the Himalayan region or its merger with Pakistan.

Rights groups say 70,000 people, mostly civilians, have died in the fighting since 1989 when the armed rebellion against Indian rule began.