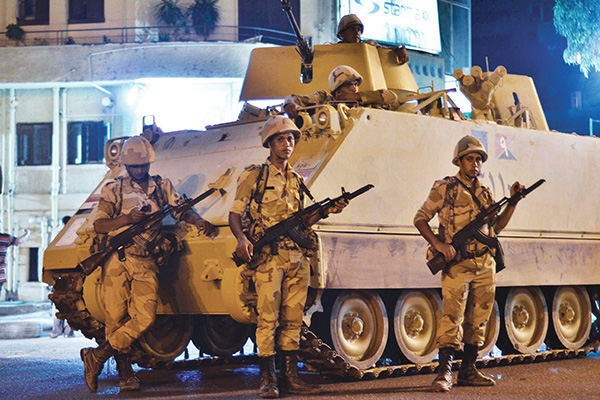 Despite a series of private and public warnings from top Obama administration officials to Egypt’s generals not to depose the country’s first elected leader, the military sprung into action and unseated the Muslim Brotherhood-aligned president, Mohamed Morsi.

The actions from the military lay bare the limited influence the Obama administration has over the leadership of an Egyptian military that gets $1.3 billion a year in aid from the United States and relies on American spare parts and training to function, while also perhaps suggesting that the private warnings delivered from top Obama officials like Gen. Martin Dempsey, the chairman of the Joint Chiefs of Staff, and Secretary of Defense Chuck Hagel could have been stronger.

“There was a press to avoid the kind of turbulence we have seen today,” one U.S. official involved in reacting to the crisis in Egypt told Newsweek. “But the jury is out on precisely what the next steps are. We will see what the process as defined by the military and their statement leads to.”

In public, the Obama administration was careful not to take sides in the political conflict that subsumed Egypt. Nonetheless, Obama condemned the military coup and said his administration would begin to review its foreign aid to Egypt in light of the events.

“We are deeply concerned by the decision of the Egyptian Armed Forces to remove President Morsi and suspend the Egyptian Constitution,” Obama said in a statement on the evening of July 3. Nonetheless Obama did not call directly on the military to return Morsi to power. Instead he said, “I now call on the Egyptian military to move quickly and responsibly to return full authority back to a democratically elected civilian government as soon as possible through an inclusive and transparent process, and to avoid any arbitrary arrests of President Morsi and his supporters.”

If the U.S. government determines that the events in Egypt constitute the military overthrow of an elected leader, U.S. law would require the suspension of military aid. Sen. Patrick Leahy, the chairman of the Senate subcommittee that determines the foreign aid budget, said that he would review the annual assistance sent to Egypt. “Egypt’s military leaders say they have no intent or desire to govern, and I hope they make good on their promise,” a statement from Leahy said. “In the meantime, our law is clear: U.S. aid is cut off when a democratically elected government is deposed by military coup or decree.”

Amy Hawthorne, an Egypt expert and a senior fellow at the Atlantic Council, said Egypt’s military has calculated that Obama needs the military more than the military needs Obama. “They’ve watched our reaction at several points and they probably came to the conclusion that they could take this action without a great risk that they would rupture the relationship with the United States,” she said.

One factor that may have led Egypt’s military to conclude there would be no consequence for deposing Morsi is Obama’s history of fighting attempts from members of Congress to impose restrictions on the annual U.S. aid package to Egypt.

Steven A. Cook, a senior fellow at the Council on Foreign Relations, said the coup in some ways was not surprising. The circumstances inside the country, including massive street demonstrations “made it so that the military couldn’t not intervene at this point,” he said. “Morsi’s defiance and the mass mobilization of Egyptians really did threaten social stability and national security.” Cook added that the military had made clear that “if these things are in jeopardy, they would intervene.”

Rep. Ed Royce, the Republican chairman of the House Committee on Foreign Affairs was mainly critical of Morsi. “It is unfortunate that Morsi did not heed popular demands for early elections after a year of his incompetent leadership and attempting a power grab for the Muslim Brotherhood,” he said. “Morsi was an obstacle to the constitutional democracy most Egyptians wanted.”