by AFP and Newsweek Pakistan September 10, 2014 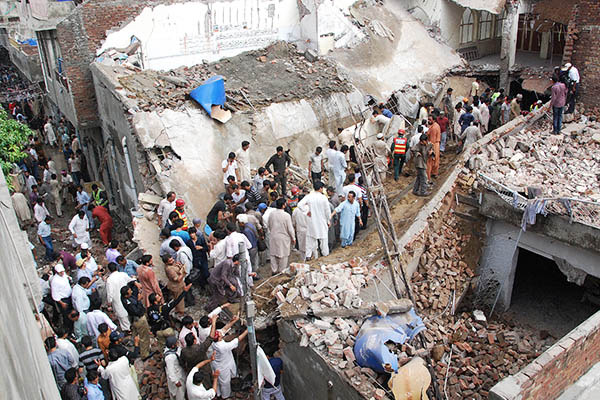 Another seven people are in hospital after being injured in the accident in Lahore.

The death toll from a mosque collapse in Lahore has risen to 24, rescuers said Wednesday, after pulling more bodies from the rubble.

The worshippers were killed when the roof of the mosque collapsed on Tuesday as around three dozen people gathered for afternoon prayers. The incident took place in Daroghawala, a low-income neighborhood of the city with narrow and congested streets.

“The death toll from the incident is now 24. The ages of the worshippers who died are between 15 to 35 years,” said Mohammed Rashid, an official at the rescue control room. “We have also taken out seven seriously injured people from the rubble,” he said.

District administration chief Mohammed Usman told media the dead and injured were recovered during 13 hours of searching. He said the rescue operation would continue until all the rubble was removed.

“According to locals’ claims it seems almost all people have been recovered but we will continue our efforts till the removal of the whole debris or any doubts [about people still trapped under the rubble],” Usman said.

Usman said the two-story mosque’s roof had collapsed, causing the first floor and roof to collapse on the ground floor, causing problems in rescue efforts.

Pakistan has a poor safety record in the construction and maintenance of buildings. Many of the more than 200 killed in floods across Pakistan this month have been victims of collapsed roofs.

At least 21 people, including 16 women and four children, died when a factory collapsed in Lahore in 2012. The collapse of the Margalla Towers apartment block in Islamabad in a 2005 earthquake killed 78 people, with shoddy construction blamed.

Punjab Chief Minister Shahbaz Sharif has directed authorities concerned to investigate the roof collapse and has also announced Rs. 500,000 as compensation to the families of the deceased. “Chief Minister Punjab also directed the hospital staff to provide the best medical facilities to those found wounded in this incident,” according to an official statement issued by his office.