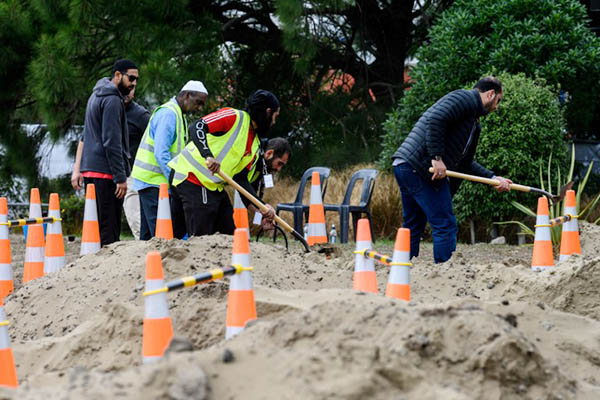 A teenager who dreamed of playing in goal for Manchester United was among the latest victims of New Zealand’s twin mosque massacre to be buried as funerals resumed on Thursday.

Hundreds of mourners, including many schoolchildren, gathered for an emotional farewell to Sayyad Milne, a 14-year-old football-mad youngster who was among the 50 people who died in last Friday’s rampage by a white supremacist.

Sayyad’s father John Milne said his son was gunned down while praying at Al Noor, the first of the two mosques attacked last Friday allegedly by Australian national Brenton Tarrant. Milne, who was at Thursday’s funeral, had previously described his son as “a beautiful boy” and “my special little one” who longed to play for the northern England football club.

Mourners arrived at the cemetery in long lines on a grey day, schoolgirls struggling to keep scarves on their heads in the windy conditions. A mournful cry of “Allahu Akbar” over a loudspeaker signaled that the prayers had begun.

Tariq Omar, a 24-year-old local who coached junior football teams, was also buried on Thursday. Local media reported that Omar was dropped off at the Al Noor mosque on the day of the killings by his mother, who survived the attack because she was trying to find a parking space when the gunman launched his assault.

Christchurch United Academy Director Colin Williamson described Omar as “a beautiful human being with a tremendous heart and love for coaching.”

The scale of the attack has caused global revulsion, including for Tarrant’s use of social media to livestream the carnage in real-time. In a rambling “manifesto,” he said he was motivated partly by a desire to stoke religious conflict between Islam and the West.

Families of his victims faced days of anxious waiting to receive the bodies of their loved ones as criminal investigators and pathologists rushed to formally identify each person. It was only on Wednesday that funerals could begin in earnest with six people buried that day, including a father and son who had arrived as refugees from the maelstrom of Syria last year.

New Zealanders have been repulsed by the attack, coming out in large numbers to pray and mourn, especially in Christchurch, which remains festooned with flowers, cards and tributes. But the killings have also sparked a debate about the country’s comparatively permissive gun laws and whether the intelligence services have done enough to counter the threat of white supremacists.

New Zealand Prime Minister Jacinda Ardern has vowed to tighten gun laws but has yet to release concrete details on what form of regulation her government favors.