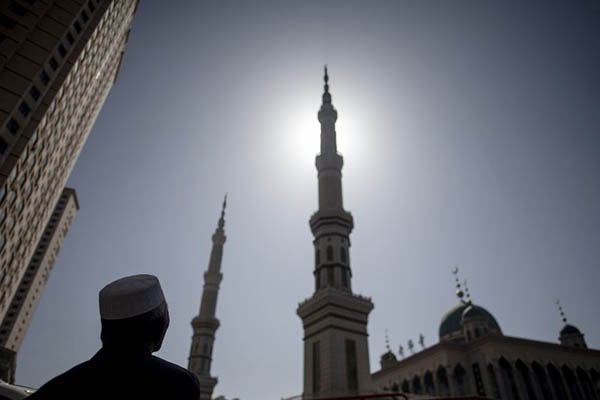 Thousands of demonstrators gathered at a mosque in China to stop its government-ordered demolition, a participant said on Saturday, as Beijing’s increasingly harsh policies against religion heighten anxiety about Islam’s future in the country.

Across the nation, Chinese officials have sought to limit religious freedoms for Muslims as part of a widespread attempt to bring believers in line with the dictates of the ruling Communist Party.

Protesters began gathering on Thursday ahead of a deadline to demolish the grand mosque in the town of Weizhou in the northern Ningxia region, a restaurant owner surnamed Ma told AFP. Videos posted on social media over the last two days show hundreds of protesters gathered in front of the building as police with riot shields stand by.

Holding Chinese flags, they sat quietly on the building’s steps and milled around a large plaza, before heading to Friday night prayers, according to the videos, which could not be verified by AFP. “The government said it’s an illegal building, but it’s not. The mosque has several hundred years of history,” Ma said.

The mosque was rebuilt over the past two years, according to government documents, but the licensing process was not carefully managed and several officials received a “serious warning” from a local disciplinary committee. In the process, the facade was changed from its previous Chinese style—featuring sweeping tiled roofs similar to a Buddhist temple—to what is often described in China as an “Arab” design, with domes and crescents.

Concerns have been growing in Weizhou since the circulation of a government order last week demanding the mosque’s demolition on the grounds that it had been rebuilt without the proper permits.

The document—which could not be verified by AFP—said that if the building was not demolished by Friday, Aug. 10, the government would “forcefully tear it down, and you will accept responsibility for the consequences.”

Calls to the local county government and the regional Islamic association on Saturday went unanswered.

The words “Weizhou mosque” appeared to be censored on China’s Twitter-like Weibo platform when AFP tried to search for them.

Islam is one of five officially recognized religions in China, home to some 23 million Muslims. Pressure has been building on the group in recent months as the Communist party moves to tighten the reins on religious expression.

China’s top leaders recently called for the “Sinicization” of religious practice—bringing it in line with “traditional” Chinese values and culture—and new regulations on religious affairs came into effect in February, sparking concern among rights groups.

The measures increased state supervision of religion in a bid to “block extremism,” and in areas with significant Muslim populations, authorities have removed Islamic symbols, such as crescents, from public spaces.

In the far western region of Xinjiang, things have gone much farther, with Muslims being harshly punished for violating regulations banning beards and burqas, and even for the possession of unauthorized Qurans.

Concerns about the mosque standoff in Weizhou appeared to be spreading on Saturday, as Muslims in other regions expressed solidarity with the protesters

“We are quietly waiting to see that the problem is satisfactorily resolved,” said one open letter posted on Weibo by a mosque in Shanxi province. If it is not, “we reserve the legal right to go to Ningxia or call on the central government to petition.”