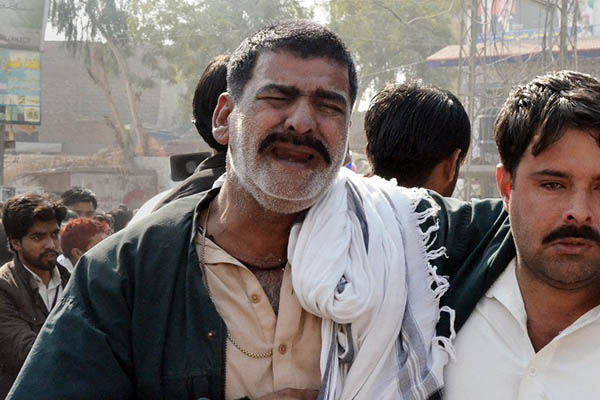 Shia Muslims across Pakistan mourn the 61 killed in the imambargah bombing at Shikarpur.

Thousands of Shia Muslims rallied Saturday to protest the killing of 61 people in a suicide bombing at an imambargah, as southern Pakistan shut down to mourn the nation’s worst sectarian attack in nearly two years.

The blast hit the imambargah in the Shikarpur district of southern Sindh province, as hundreds of worshippers attended Friday prayers. Police on Saturday said the devastating explosion was a suicide attack and the bomber detonated the explosives strapped to his body “in the middle of the mosque.”

“The bomber selected a place in the mosque that would cause huge destruction,” said Raja Umar Khitab, a police official in Sindh’s counter-terror department. He said the bomb was loaded with steel pellets, ball bearings and other shrapnel to cause maximum damage.

The provincial government announced Saturday as a day of mourning, closing schools, shops and offices, with no public transport available on the roads.

In Shikarpur, thousands gathered to attend funeral prayers for the dead. Local television broadcast footage of thousands of people, mostly Shia Muslims, carrying black flags and beating their chests as they offered their prayers one after another.

Police said unidentified “miscreants” early Saturday set fire to a passenger bus and a truck in the city, but no one was hurt.

Pakistan has suffered a rising tide of sectarian violence in recent years, most of it perpetrated by hardline Sunni Muslim groups against minority Shias, who make up around 20 percent of the population. A spokesman for the Jandullah militant group, a splinter faction of the Pakistani Taliban, said they were behind the latest blast.

Friday’s bombing was the bloodiest single sectarian attack in Pakistan since March 2013, when a car bomb in a Shia neighborhood of Karachi killed 45. Around 1,000 Shiites have been killed in the past two years across Pakistan, with many of the attacks claimed by the hardline Sunni group Lashkar-e-Jhangvi.