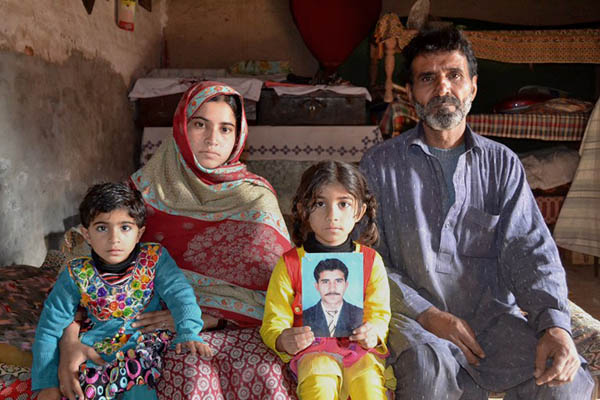 The families of Pakistani men facing execution by the Gulf state urge Islamabad to intercede on behalf of its citizens.

Every morning, Haji Abdul Haq wakes up wondering whether his son has been beheaded. Not by the Taliban, Al Qaeda or the Islamic State group, but by the Saudi Arabian government.

Haq’s son is on death row in the ultraconservative kingdom, waiting for his name to be added to the growing roll of Pakistanis executed this year by the Saudis for heroin smuggling. Saudi Arabia has meted out the gruesome fate to 74 people in 2014, 15 of them Pakistanis convicted of drug smuggling.

Families and rights campaigners complain their trials are opaque and unfair, and accuse the Pakistani government of doing nothing to help its citizens, afraid of offending an important and hugely wealthy ally.

Haq’s son Mohammad Irfan, 27, awaits his death in the Saudi prison of Al-Ha’ir, thousands of miles from the orange groves and wheatfields of his native Punjab, where his father told his story.

Four years ago, Haq said, two men came and said that for $2,000 they would get Irfan plane tickets and a visa for the Gulf—for many poor Pakistanis, a passport to a better life. Irfan sold his rickshaw and wife’s jewels and his tea-seller father made up the rest of the money.

The two men then took Irfan to Karachi, a key transit point for heroin from Afghanistan. But in Karachi, things turned sour, Haq says. “The two men changed and told him they would kill him unless he did what they wanted,” Haq said. “After that they forced capsules of heroin into his anus.”

Irfan was put on a flight to Saudi Arabia by his new masters. On arrival in Riyadh he was stopped by customs officers and after a brisk trial, condemned to death.

Pakistan is full of stories about drug mules, but they are little discussed in public and get little sympathy. One Pakistani official said that “in most of the cases the sentence or the punishment is justified.”

Rights group Amnesty International says Saudi Arabia uses the death penalty disproportionately against foreigners, particularly those from South Asia. Since 1985 around half of 2,000 people executed in the kingdom have been foreigners.

The Justice Project Pakistan (JPP), a human rights law firm, has begun trying to get Islamabad to defend them. “These prisoners are very poor men who have been sold a chance to escape and make something of their lives,” said Sohail Yafat, a JPP investigator.

Almost half of Afghanistan’s heroin production comes through Pakistan on its way to Europe and Asia. But in recent years the Gulf has become an increasingly important market, according to the United Nations Office on Drugs and Crime (UNODC).

Seizures of the drug in Saudi Arabia have exploded, from just one kg a year in the early 2000s to 41 kg in 2008 and 111 in 2011, according to data given by the Saudis to the U.N. In August and September alone, nearly 400 people, including nearly 300 foreigners, were arrested for possessing or dealing heroin, according to the Saudi government.

Riyadh says it wants to protect Saudi society from the scourge of heroin, but rights groups are highly critical of its judicial system.

Sarah Leah Whitson of Human Rights Watch says the absence of a penal code in Saudi Arabia makes it particularly arbitrary. “There is no law that defines what is and is not a crime—it is really up to the judge to decide what is a crime and what level of evidence is required to establish that a crime occurred,” she said.

The prisoners and their families also criticize the Pakistani government for sacrificing its own citizens for the sake of good relations with an ally. Saudi Arabia supplies oil and financial aid to Pakistan, while Pakistan helps with military assistance, according to analysts.

“In the perspective of the government, the relations with Saudi Arabia are too important, too critical, to be sacrificed for individuals who, in the mind of the state, are responsible” for their acts, said analyst Ayesha Siddiqa.

Haji Abdul Haq has written to numerous officials, including Prime Minister Nawaz Sharif, urging them to lobby the Saudis on behalf of his son. “The drugs mafia, it’s like a tree—the Saudis are cutting the branches but the trunk and the roots are still there,” said Haq, sitting with Irfan’s two daughters. One of the girls has never seen her father.

Our people pretend to be innocent but contrary to it they all do this to get rich over night. These people know the law of Saudi Arabia very clearly and these greedy people are also damaging the image of Pakistan. I suggest they should talk in media and media should air the laws of Saudi Arabia about drug/heroin mules. So that in future they should tell other heroin mules that they should not do it at the peril of their life. These drug mules do not deserve any mercy.