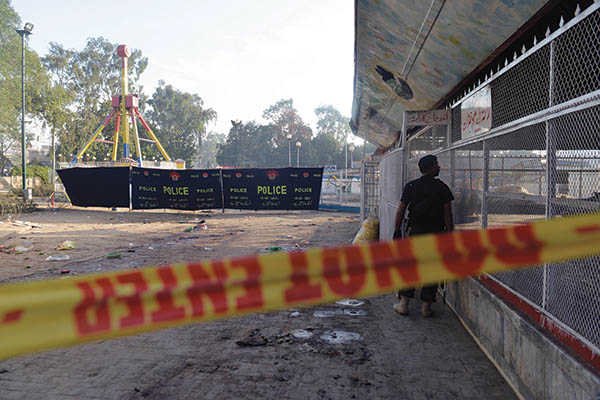 One month after a brutal suicide attack on Lahore’s Gulshan-e-Iqbal Park, there is little progress in bringing its perpetrators to heel.

Lahore’s Gulshan-e-Iqbal Park was once an oasis of green amidst an increasingly paved-over city. Families, many of them unable to afford more expensive indulgences, would swarm the 66-acre site to avail its jogging track, mini-zoo, paddle boats or the fairgrounds that housed several children’s rides. Shouts of children at play were welcome and commonplace. There are no children at Gulshan-e-Iqbal Park anymore. Instead, visitors are greeted by stern-faced policemen, forensic scientists, gardeners and laborers trying to wipe away lingering traces of the second deadliest terror attack to hit Pakistan since 2014.

On March 27, Easter Sunday, a militant of Pakistani Taliban offshoot Jamaat-ul-Ahrar detonated a suicide vest packed with 10kg of explosives and metal ball bearings outside the park’s Gate No. 5—situated between two children’s rides in the fairground area. An estimated 30,000 people were at the park that day, according to the Punjab Parks and Horticulture Authority, most of them members of the Christian minority commemorating Easter. Over 60 people were confirmed dead in the immediate aftermath, with many of the over 300 injured in critical condition. The final tally, as of April 25, was 73 dead. Of these, 29 were children—the youngest merely two years old and the oldest 16.

Sarwar, an amusement ride operator, was among the rescuers on March 27. He recalls collecting the tiny bodies, some lifeless, some bloodied, as they fell off the swings. “I can’t tell you how I feel,” he says wearily. “When I look around, I still remember one five-year-old boy. He was injured and crying for his father. I couldn’t help him,” he says. “Do you know what happened to him?”

Messages of sorrow and solidarity poured in from across the world. Pope Francis condemned the “reprehensible” attack, and urged Islamabad to “restore security” to the country’s most vulnerable religious minorities. United Nations Secretary-General Ban Ki-moon echoed his concerns, while Indian Prime Minister Narendra Modi offered his condolences to the victims’ families.

Reacting to the brutal assault, Prime Minister Nawaz Sharif and Chief of Army Staff Gen. Raheel Sharif chaired separate meetings with senior security officials. Before midnight on March 27, Army spokesman Lt. Gen. Asim Bajwa announced on Twitter the military would spearhead a crackdown in Punjab. The country’s most populous province had managed to avoid a full military operation thus far, thanks largely to Shahbaz Sharif, the brother of P.M. Sharif and chief minister of the Punjab, whose ruling Pakistan Muslim League (Nawaz) party had repeatedly denied the presence of militants in the region. In a 2014 interview, provincial law minister Rana Sanaullah told Newsweek that Punjab was safe. “We have effectively broken the links of the terrorism chain,” he said. Two years later, he is speaking a different tune, claiming to be an integral part of a joint civil-military counter-terrorism operation to root out militants from the province.

His first task, say observers, should be to eradicate hubs of militancy in South Punjab. While preliminary investigations have revealed the March 27 bomber’s origins in Wana, South Waziristan, a network of sympathizers in Punjab’s rural heartland is believed to be aiding and abetting strikes on the country’s urban centers. The government has also been urged to increase security for minorities, especially after the Jamaat-ul-Ahrar admitted the Christian community was their primary target on March 27. This isn’t a recent development.

Gulshan-e-Iqbal Park is located in Iqbal Town, a middle class neighborhood in Lahore that has a substantial Christian population. Militants have targeted the community in the past. In 2009, two successive blasts ripped through one of its busiest markets, Moon Bazaar, which is located within walking distance of the park. Jamaat-ul-Ahrar likely chose Iqbal Town for its brutal attack because of these demographics.

Ahrar split off from the umbrella Tehreek-e-Taliban Pakistan in August 2014 after pledging their allegiance to the Islamic State. In the 20 months since, the militant group has repeatedly targeted Lahore, claiming some of the worst terror attacks to strike the provincial capital. On Nov. 2, 2014, an Ahrar militant killed 54 people near the Wagah border crossing between Pakistan and India. Less than six months later, on March 15, 2015, suicide bombers struck two churches in a largely Christian neighborhood, killing 23 people. Ahrar also claimed the August 2015 assassination of Punjab home minister Shuja Khanzada at his office in Attock.

Shortly after the March 27 attack, Ahrar spokesman Ehsanullah Ehsan told Newsweek the militants would continue to target Pakistan until the country adopted Islamic shariah law as its primary legal system. “The government is repeatedly releasing propaganda that they have broken the Taliban’s backs, and damaged our capacity. This [Gulshan-e-Iqbal Park] attack gives a clear message that we are still here. We have not lost and this proves that we can attack any place in Pakistan, at any time.”

While chilling, Ehsan’s words are unlikely to offer any new information for Islamabad. Much like the 2014 attack on Peshawar’s Army Public School, the government was aware of the terror threat to Iqbal Town. And much like the Khyber-Pakhtunkhwa government failed to act then, so too did the Punjab government in March, leaving dozens of families shattered. 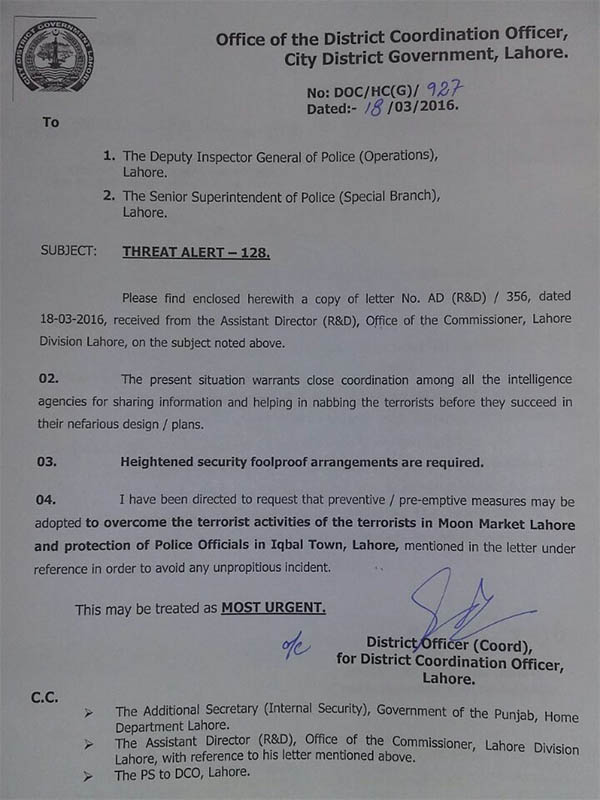 A notification issued by the Lahore District Coordination Officer—on March 18, nine days before the attack—clearly identifies the impending terror strike. The document, seen by Newsweek, requests the provincial capital’s police to take “preventive/pre-emptive measures to overcome the terrorists’ activities in Moon Market Lahore and for the protection of police officials in Iqbal Town… in order to avoid any unpropitious incident.”

An underlined plea to treat the threat as “MOST URGENT” apparently went ignored with only two civilian guards wielding one handheld metal detector deputed for the entire park. There was no CCTV coverage or official police presence in the area. Rescuers took nearly 10 minutes to arrive, forcing neighborhood boys to ferry the dead and injured to hospital in taxis and rickshaws.

There is no realistic way to secure the entirety of a sprawling metropolis like Lahore. A city government official told Newsweek on condition of anonymity that it was impossible to protect the 1,100 public parks located in the “city of gardens”. “No extra security can be given,” he says. “We can only ensure improved gate-keeping, which will include more security guards and better walkthrough gates.” A senior cop, also speaking on condition of anonymity, says the police are severely understaffed as it is with thousands deputed to protect VIPs and government and security installations. “There are far too many important public locations to guard. You can’t keep the entirety of Lahore safe,” he says. “We are leaving it to God.”

A police investigation into the March 27 attack, ordered by the chief minister in its immediate aftermath, has also yielded little of note. Initial reports claimed hundreds of suspects had been taken into custody, but most were released within hours. Four men were placed under arrest—two of them related to the attacker and previously associated with banned sectarian outfit Sipah-e-Sahaba—but have yet to divulge any information. Police Deputy Inspector General (Operations) Dr. Haider Ashraf, who is heading preliminary investigations, says that raids on suspects are continuing but there are no new leads. “We are still consolidating all the evidence,” he told Newsweek. On April 17, Ashraf says, police arrested 27 people. Four of them have been detained for further interrogation, while 23 have already been released.

None of this offers any comfort to the workers and administrators of Gulshan-e-Iqbal Park. In an attempt to assuage the public’s concerns, all five gates at Gulshan-e-Iqbal Park will now be monitored with CCTV. The boundary wall has been raised by a few inches to prevent people from sneaking in. New security guards are also being interviewed. But the people have yet to return. “People are scared. That can’t be denied and the heat doesn’t help,” says an optimistic Farhat Shah, the newly appointed director of the park. “We expect people to show up sooner or later.”

Mian Innayat, a security guard who used to work at the park, won’t be among them. His wife has been in a coma since the attack, while he lost a leg—and three of his five children. “He was smiling when he went in,” remembers colleague Arsalan, “the next time I saw him he was carrying the disfigured body of his teenage son, then his other son, and then his daughter.” Arsalan hopes Innayat will be able to return, but admits he would have to learn to reconcile the unthinkable events of March 27. “Where do you find strength after losing three children?” Another guard, seated nearby, wondered whether there was any point to reopening the fairgrounds—due for the first week of May—adding, “I used to bring my daughter to this park. She enjoyed it. But never again… Even though I work here, I will never bring her here again.”