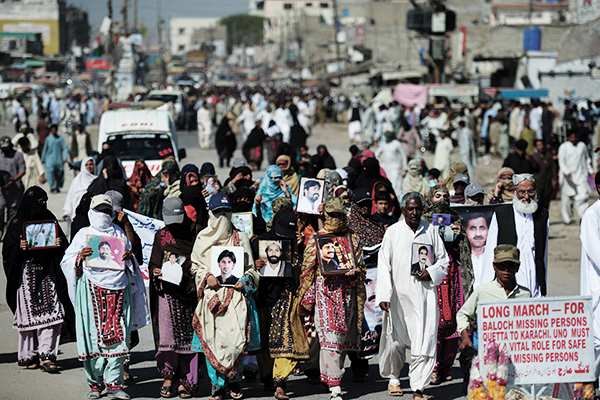 Around 20 Baloch families, mostly women and children, set off on Oct. 27 from Quetta and traversed some 700 kilometers on foot to reach Karachi. At press time, the protesters were still camped out in front of the Karachi Press Club, hoping to raise awareness about their loved ones who have been disappeared, allegedly by Pakistan’s security agencies. The accusation against the Army is not new. The matter of “missing persons” has been taken up by the Supreme Court, the media, and indeed by Nawaz Sharif before he was elected prime minister. What was new was the belittling official response to the impressive 26-day odyssey of the Baloch marchers: Balochistan’s chief minister and Sharif ally, Abdul Malik Baloch, dismissed the protest as “seasonal.” Mama Qadeer Baloch, chairman of the Voice for Baloch Missing Persons, slated the current and previous governments for failing to arrest the tide of kidnappings and extrajudicial killings of the Baloch. He said the protesters would rest for a few days, then decide whether to continue onward to Islamabad. (No decision had been announced as of Nov. 27.) At least Chief Justice Iftikhar Chaudhry took notice. He ordered Sharif’s government to either produce 35 “missing persons” in court on Nov. 28 or explain why it could not through a personal appearance by the defense minister. A day ahead of the court date, Sharif washed his hands off the defense portfolio to spare himself the humiliation.