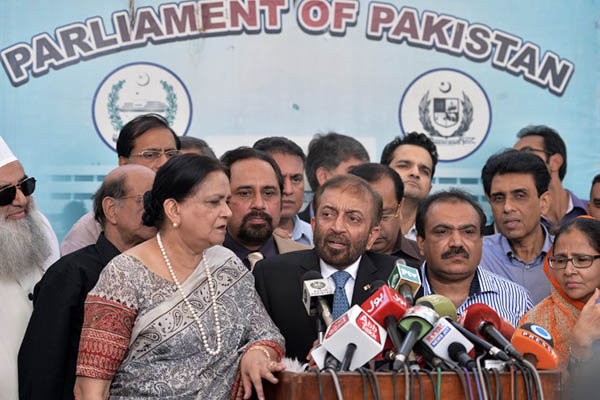 Tensions have been rising between MQM chief Altaf Hussain and the powerful military establishment in recent weeks.

“The members of parliament from MQM, eight senators, 24 MNAs and 51 members of provincial Sindh assembly, have resigned in protest against the injustice, political victimization and pushing the party to wall,” senior party leader Farooq Sattar told reporters in Islamabad.

Khawaja Izharul Hassan, a senior MQM figure in the Sindh provincial assembly, told AFP the party was being singled out in the operation in Karachi. “We resigned because the MQM is being victimized in the garb of the targeted operation in Karachi for elimination of terrorism,” he said.

A spokesman for the National Assembly said the speaker had received 23 out of 24 resignations and would pass them on to the Election Commission.

The rift between the MQM and the military widened in June, when Hussain, who lives in exile in London, in an address to his workers accused the paramilitary Rangers of torturing and killing party workers and dumping their mutilated bodies on roadsides. The Rangers have been carrying out an operation aimed at ending the wave of political, religious, ethnic and criminal violence that has swamped the city in recent years.

The MQM has itself often been accused by critics of using extortion and murder to cement its power over the city. The party has accused law enforcement agencies of the extrajudicial killing of 40 of its workers and the forcible “disappearance” of 150 more.