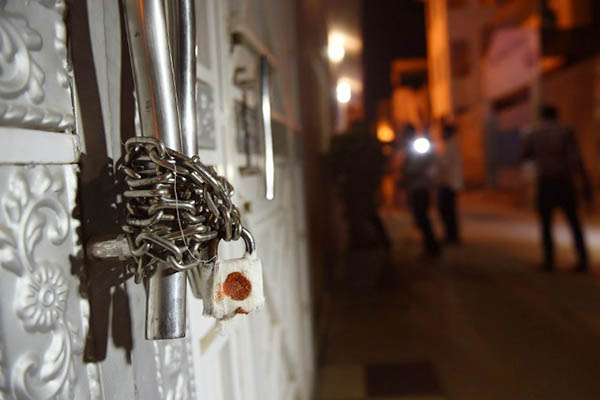 A view of the MQM’s sealed offices at Nine-Zero. Rizwan Tabassum—AFP

Islamabad’s best bet is to try and use the MQM leadership in Karachi as a counter to Altaf Hussain’s exhortations from London.

On Aug. 22, Muttahida Qaumi Movement chief Altaf Hussain got on the phone and ordered a gathering of his party followers observing “hunger strike unto death” in Karachi to go and attack three TV channels for not broadcasting his speeches. (He is banned by a High Court order from appearing on TV.) He was asked by his audience whether he really wanted them to attack the identified TV channels to which he said ‘Bismillah,’ a common “go ahead” among the Urdu-speaking populace. After that ARY, SAMAA and GEO were attacked, with the ARY office being ransacked.

Altaf Hussain and his “coordination” committee in London have embarked on a policy of extreme measures. They have set forward a process of elimination of the MQM’s leadership in Pakistan as led by Dr. Farooq Sattar. Beginning with the resignation of Hussain from the leadership of the party, London appears to want to shed normal politics and return to its old pattern of low-echelon “violence of the sector in-charge” to make Hussain the supreme decision-maker once again.

Hussain also cursed Chief of the Rangers in Karachi Major-General Bilal Akbar and ISI Chief General Rizwan Akhtar. He dramatized the execution of the former saying: “I will hang him in Karachi if only I could lay my hands on Israeli weapons. I would put D.G. Rangers on trial, hang him and keep him in the open for three months to make his dead body rot.”

The “rejected” top leaders of the MQM in Karachi were picked up by the Rangers and the headquarters of the party at Nine-Zero was sealed; but only two came on TV to defend their exiled leader, Mustafa Azizabadi and Amir Liaquat Hussain. Fake-degree “Dr.” Amir Liaquat, reinstated after his ouster from the party in 2008, made ineffective pleas in Hussain’s favor, likely wanting to replace Dr. Sattar in case Hussain got rid of him. (Dr. Hussain was removed from General Musharraf’s cabinet in 2007 after he praised Al Qaeda’s killing of Americans in Iraq and cursed Musharraf’s policy of alliance with the Americans.)

Most likely, Islamabad won’t be able to get Altaf Hussain, a British citizen, extradited from London to be tried for treason in Pakistan. It would actually be foolhardy to bring him home at this point of retreat of the MQM into its “sector in-charge” mode of violence. But determined action to encourage the “rejected” MQM leadership in Karachi to cooperate with the Rangers to disband MQM’s infrastructure of violence and thus make Altaf Hussain irrelevant would be the way to go.