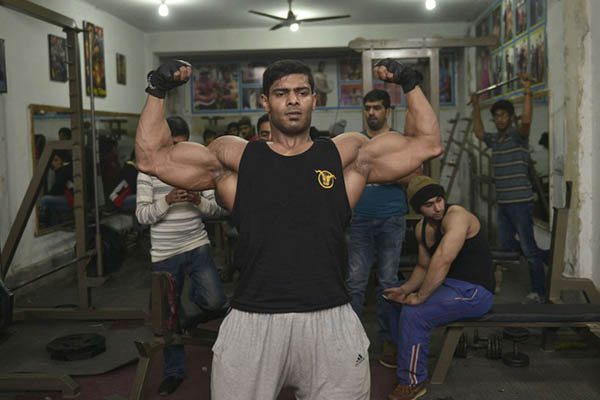 Salman Ahmed feels he must choose between pursuing a bodybuilding career or abandoning Pakistan.

Salman Ahmed was alone in the crowd when he became the first Pakistani to win the Musclemania world bodybuilding title in Las Vegas last year, unable to afford an entourage of managers, coaches, promoters like his fellow competitors.

Now the 25-year-old is back in Pakistan and facing a choice: with no financial support from the government of his cricket-obsessed country and potential sponsors made skittish by its security issues, he must decide between giving up his glittering career—or leaving home.

“A bodybuilder has no future in Pakistan,” he says during a workout at his gym in a low-income neighborhood of Lahore.

The U.S. Consulate has congratulated him on his historic win in the lightweight category at Musclemania, the world’s premier natural bodybuilding contest. Even Pakistan’s rival India has been courting him by inviting him to speak at seminars in various cities.

But from Pakistani officials, he says, he has not heard a word. “Cricket players get all the limelight, while other sportsmen suffer due to lack of attention and financial support,” says Ahmed. “Nobody in the government cared to even send me a congratulatory message.”

He says he has had “some very lucrative offers” from European countries and the U.S. to compete for them instead. “But then I would have to leave my home and my country, and I would not be able to wave the Pakistani flag when I win.”

Music pumps at the shabby, worn Body Shape Fitness Center as mirrors reflect Ahmed and his protégé, 21-year-old Hassan Butt, straining to lift weights so heavy that other gym-goers pause to gawk at them.

Bodybuilding is not a widely-practiced sport in Pakistan, though Butt—himself a national champion who vows to follow Ahmed’s path—says its popularity is growing in the era of the selfie because young people like to post pictures of their muscles on Facebook. He admits, however, that for some the motivations are shallow: many young men pay their $5 a month to come to the gym and take a selfie of their “workout” to send to female friends, then leave without lifting a single weight.

The sport’s unpopularity has previously worked in Ahmed’s favor: he initially applied for university as a cricket player but the competition was too stiff. Unable to afford the fees on his own, he tried his luck in bodybuilding—even then he was initially rejected, but after begging for a chance college authorities relented, warning he would have to bulk up.

Now he has a Masters in Human Resource Management from the University of Central Punjab but says starting salaries would pay only around $160 a month, while the proteins alone that he says he needs cost about $180. He cannot count on financial support from his family—his father became ill during his time in university and often he found himself working three jobs while studying to support relatives.

And sponsors, he says, run away when they hear the word “Pakistan”—fearful of the country’s security situation. “They are too afraid to come here,” he says. “I tell them that Lahore is safe… but they do not believe.”

Currently he manages the gym, once owned by his late brother—but the income it generates is hardly enough to pay the rent, much less support his training regime. “It is a huge challenge,” he admits.

Ahmed began competing in local competitions through college and by 2014 was competing in Miami and Las Vegas. After months of rigorous training, he took on some 600 bodybuilders from around the world at Musclemania last year with nothing but his own determination behind him.

“Koreans, Americans and European bodybuilders were in teams, they had managers and coaches and media promoters with them,” he says. “I was alone there—a one-man team—and beat them all.”

His mother Sajida Yasin—who, Ahmed says, can predict which bodybuilders will win just by looking at them, and knows all the details of his diet and exercise regime—said that she wept for joy after watching online from Lahore as her son lifted the trophy. Now he has his sights set on winning the Musclemania Pro category, to be held in Miami in June.

There may yet be hope. Usman Anwar, head of the Punjab Sports Board, says the government had simply not been aware of Ahmed’s achievement. “Had we known that he was going to participate in the event we would not only have supported him, we would have encouraged him and provided him training and technical expertise and all the logistics also,” said Anwar.

The PSB has now called Ahmed and will meet him soon, he says, to hear his story and recommend financial support—though the extent of that is yet unclear.

For Ahmed, decision time is approaching. “I want to be on top of this field,” he says. “Ultimately, I have to make a choice… But it is with a very heavy heart.”