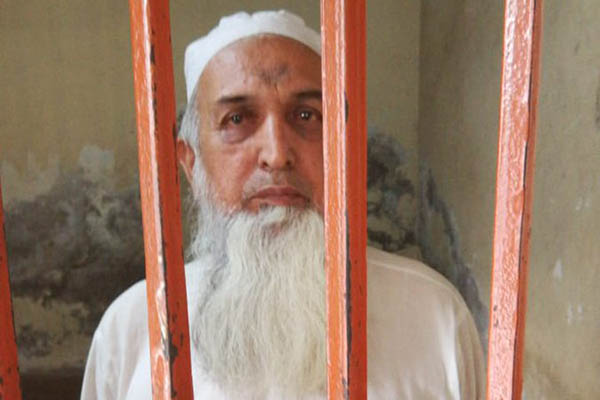 A team of the Crime Investigation Agency (CIA) on Sunday arrested Mufti Azizur Rehman for allegedly sexually assaulting one of his students at a madrassa in Lahore, videos of which went viral on social media the past week, prompting calls for strict action.

In a statement, officials of the CIA said that they had apprehended Rehman during a raid in Mianwali. They said he was then transported to Lahore, where authorities would proceed with the case against him. Later, they added, that two of his sons, Altafur Rehman and Atiqur Rehman, had also been arrested and booked for criminal intimidation over threatening the former student for filing a case against their father. His third son was also taken into custody a few hours later.

Punjab Inspector General of Police Inam Ghani, in a posting on Twitter, said that police would treat this case as a “test case” for such criminal activities. “We will take it as a test case, interrogate him, conduct scientific professional investigation, prosecute and get him convicted by the court. We want our kids protected from these child molesters and keep our society safe for our future,” he added.

In the FIR, the victim has alleged that Rehman molested and raped him once a week for three years, adding that he had been told that he would be failed in exams if he did not make the teacher “happy.” He has also alleged that he had repeatedly complained to madrassa authorities but they had dismissed him by claiming that an “elderly and pious” scholar could not be guilty of such crimes.

Rehman’s arrest was ordered last week but encountered delays, as Lahore police on Friday announced that he had fled the city and was being traced. In statements, a spokesperson said his location had been traced using his cellphone to various points in Lahore, but he had kept fleeing the scene before police could reach him.

Last week, police in Lahore registered a case against Rehman after a horrifying video of him allegedly sexually assaulting one of his students at Lahore’s Jamia Manzoorul Islamia was leaked on social media by the victim. Lodged at the North Cantonment Police Station, the FIR was registered under Sections 377 (unnatural offenses) and 506 (criminal intimidation) of the Pakistan Penal Code. It also sought the arrests of Rehman’s three sons, who the victim has alleged have threatened him with death for pursuing a case against their father.

Public outrage has been mounting since the videos went viral, with social media users demanding action against not only Rehman, but all instances of molestation that are reportedly rampant in madrassas nationwide. The government has yet to issue any statement on the case, but Special Representative to the P.M. on Religious Harmony Tahir Ashrafi has told media that it should not be taken as an indictment of madrassas, but rather a case of an individual criminal who must be punished under law.

Rehman, meanwhile, has claimed he is being targeted by a “conspiracy,” and sought to blame the victim by alleging that the student was a “willing participant” in the leaked video. He has already been removed from membership of the Jamiat Ulema-e-Islam (Fazl), and as a teacher of the madrassa in light of the activities clearly visible in the video clip.