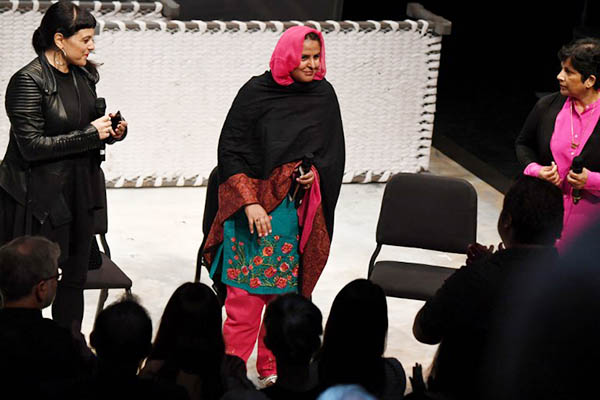 Fifteen years after her horrific gang rape by a local clan in her village in Pakistan, Mukhtaran Mai is reliving her ordeal—and courageousness—through a U.S. opera inspired by her story.

“I was very emotional when I first started watching it and began reliving the incident in my mind,” Mai, 37, told AFP on Friday, after attending the Los Angeles premiere of Thumbprint. “But then as the opera progressed, it became easier to watch and I felt more courage,” she said in Urdu, speaking through a translator.

The opera, by composer Kamala Sankaram and librettist Susan Yankowitz, recounts Mai’s 2002 rape and her decision to defy her attackers and take them to court—an unusual move in male-dominated Pakistan, where a woman who suffers such a crime often commits suicide rather than endure the stigma and shame associated with it.

Thumbprint first opened in New York in 2014 but Mai had never seen the opera. She traveled this week from her home in Meerwala to attend the West Coast premiere.

While the story onstage ends when Mai’s rapists have been sentenced to death, in reality her attackers walk free—seemingly going about their daily life with total impunity after their sentences were overturned on appeal. The men had raped Mai—with the approval of the village council—as a punishment after her 12-year-old brother was falsely accused of having an illicit relationship with a woman from the dominant clan in the village.

“My rapists live across from my house and I try not to cross paths with them,” said Mai, who used compensation money from her case to start several schools and a women’s shelter in her village. “When I walk past, they taunt me and make catcalls.”

In an added strange twist to her story, the children of her rapists attend her school, and the daughters of some of the village elders who ordered her rape have sought refuge at her shelter. “Even though some members of my own family were outraged, I told them I could not turn away the kids as the school is here to serve everyone in the community,” she said.

Mai, who married in 2009 and has three children, acknowledged that her story had empowered women in her village and beyond, giving them courage to stand for their rights. But she said she held little hope that the legal system in her country would ever render her justice.

“All four of the men who raped me and the two village elders who ordered the rape are free,” she said. “And they will only learn that what they did is a crime if they are punished.”

She said she had grown tired of being the woman everyone points to because of her ordeal, in contrast to her rapists who are unconcerned and will likely never pay for their crime. “I am the one who is always interviewed and put forward in this case,” she sighed. “Why doesn’t anyone confront them, why doesn’t anyone point them out in the street and say, ‘These are the people who committed horrific acts against Mukhtar Mai?’”

She said she receives threatening messages daily on her telephone, Facebook page or in person and is now afraid for the safety of her children. “I have reported nearly 35 such threatening calls and incidents and only one person was arrested, but even he was let out on bail,” she said. “I want to make it known that if anything happens to me or my children and family members, the Pakistani government is responsible.”

As for the opera inspired by her story, she doubts it could ever be shown in Pakistan, where it would certainly hit a nerve. But, she said, “I would like it to be shown everywhere. And I would like for the people who committed this crime to be identified and come face to face with what they did.”