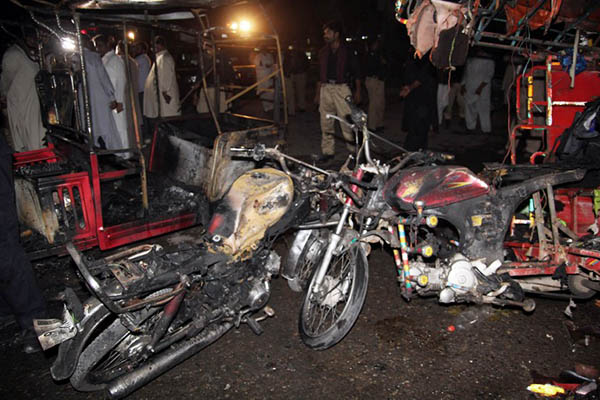 At least 42 others wounded after motorcycle collided with rickshaw transporting explosive material.

At least nine people were killed and 42 others wounded in an explosion on a congested road in Multan on Sunday, police said.

The blast came when a motorcycle hit an auto rickshaw that police believe was carrying some kind of explosive material while traveling on the city’s Vehari Road.

“At least nine people were killed and more than 40 were wounded,” said Multan police chief Azhar Ikram, adding that the rickshaw had exploded on impact.

Ashiq Malik, chief of Nishtar Hospital, confirmed the death toll and said 42 others were wounded. The doctor said that 15 people were discharged after their wounds were dressed, while 27 were admitted to hospital.

Ikram said that police initially thought the Compressed Natural Gas (CNG) cylinder installed in the rickshaw had detonated, but that bomb disposal staff later found traces of explosive material. He said that police had launched investigation into the incident and are trying to identify the passengers in the rickshaw in an effort to discover where the explosives had come from and why they were being transported.

The southern parts of Punjab, the province where the city of 1.1 million people is located, are rife with sectarian militants allied to Taliban. In the past year Pakistani authorities have cracked down hard on the myriad insurgent groups that have plagued the country for a decade.

The offensive intensified after Taliban gunmen slaughtered more than 130 children at a school in Peshawar in December last year.