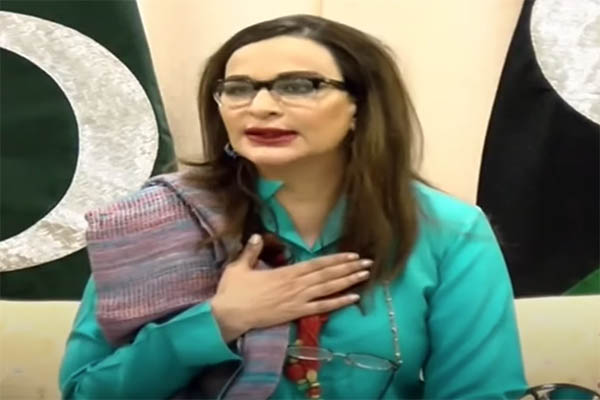 Criticizing the “incompetent” Pakistan Tehreek-e-Insaf-led government for failing “miserably” in every segment of governance, Pakistan Peoples Party Senator Sherry Rehman questioned why despite taking multiple “notices,” it was unable to provide any relief.

“This is a divisive government, an incompetent government, an unaware government,” she told a press conference in Islamabad. “This ‘notice’ government just keeps taking notice but nothing happens after that,” she said, adding that the PTI had yet to explain why wheat prices continued to skyrocket despite imports. Accusing the ruling party’s ministers of “stockpiling,” she said the ongoing wheat crisis was visible to anyone as far back as December 2019.

“Portfolios of those named [in wheat, sugar scandals] were changed and they then went abroad without a worry,” she said, referring to Khusro Bakhtiar, whose portfolio was changed from National Food Security to Economic Affairs, and Jahangir Khan Tareen, the PTI stalwart accused of profiting off sugar prices.

“The sugar thieves go out, the BRT buses burn but the NAB is only for the opposition,” she said. Advising the government against legislating “wrong laws,” she questioned how it planned to curb inflation when it was guilty of securing more loans in the past two years than the previous government had obtained in its five-year term. “1 percent is what this incompetent and unaware government has given,” she said.

Recalling the PTI’s 126-day sit-in in the federal capital, she questioned why the government was now urging the opposition against organizing peaceful rallies. “We are democratic. We had thought we would let the government complete its tenure but it looks like it will end soon,” she said. “You were supposed to protest over the Kashmir issue every Friday; what happened to that? You did not even convene a meeting on the Kashmir issue,” she added.

“It was expected that a special session of Parliament would be held today after India’s aggressive move but that did not happen. The Kashmiri [people] are the only victims of Indian state terrorism,” she said, noting a united front should have been developed to send a “strong message.”

Rehman accused the incumbent government of “disrespecting” Parliament, claiming it discouraged opposition leaders from highlighting the problems of the common man. “If there can be a joint meeting for the FATF [Financial Action Task Force], why not one for Kashmir,” she asked, adding the PPP had supported FATF legislation.

On the anti-money laundering global watchdog’s decision to retain Pakistan on its grey list, Rehman questioned why the PTI was hailing it as a victory. “Whether it is the FATF or the IMF [International Monetary Fund], this incompetent government is failing everywhere,” she said, adding that in its two years of power, the government had failed to “protect Pakistan’s interests.”

Stressing that the crises posed by the FATF, Kashmir, Gilgit-Baltistan elections and the COVID-19 pandemic had provided a chance for the government to evolve national unity, but the “prime minister’s circus party created hurdles.”

The incumbent government has little time left, warned Rehman, accusing it of failing on multiple fronts. “Winter has come, where is the gas, what is the plan for gas? The government has no plan of action for gas,” she said of a looming gas shortage that risks impacting both domestic and industrial consumers.

Similarly, she said, polio had been brought to the brink of extinction before the PTI’s policies brought it back. She also hit out at recent incidents of terrorism, stressing that she “did not know” what this government was trying to accomplish.

The senator also warned that the Tiger Force, tasked by Prime Minister Imran Khan to “monitor” prices of essential commodities and hoarding, would be unable to work effectively because “this country will not be run through threats and bullying.”

Separately, addressing a corner meeting in Skardu, PPP Chairman Bilawal Bhutto-Zardari warned that his party would launch protests in Islamabad if there were any vote theft in upcoming polls. He vowed to stay in the region until the polls on Nov. 15, adding that he would celebrate his party’s victory in the elections with the people of the region.