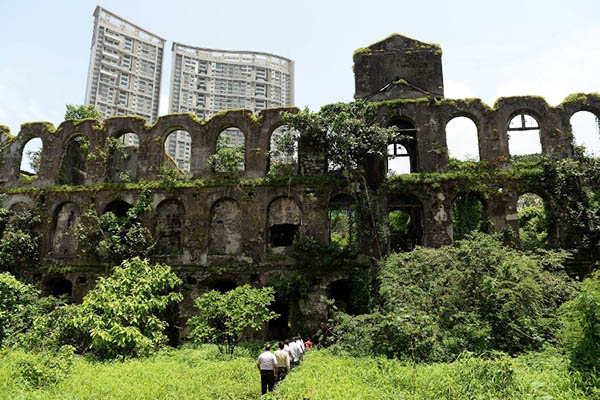 The abandoned mill compound where the photographer was gang-raped. Punit Paranjpe—AFP

Court to pronounce sentence on Friday, as a fifth member of the group currently undergoes trial in juvenile court.

A Mumbai court convicted four men on Thursday over the gang rape of a photographer on assignment in the Indian city last year, a case that reignited nationwide anger over women’s safety.

The court found the men guilty of raping the 22-year-old in August last year at an abandoned mill compound, where she had gone to take photos with a male colleague, close to an upscale area of the financial city.

Mohammed Salim Ansari, Siraj Rehmat Khan, Vijay Mohan Jadhav and Mohammed Kasim Hafeez Shaikh, also known as Kasim Bangali, aged between 18 to 27 at the time of their arrests, were in the south Mumbai court to hear the verdict. “All the four accused are found guilty of committing forced sex,” said Judge Shalini Phansalkar Joshi, adding that the four would be sentenced on Friday when they could be handed life in prison.

The judge said they were also found guilty of other offenses including having unnatural sex, showing pornography to the woman and forcing her to perform similar acts, stripping her, and destroying evidence.

The attack sparked outrage in Mumbai, which had long been considered safer for women than the capital New Delhi, where the fatal gang rape of a young student in December shook the nation.

Handcuffed and surrounded by police in the court, the four, wearing shirts and jeans, showed little emotion as the verdict was read out. A fifth accused is being tried separately by a juvenile court.

Three of the men, Jadhav, Ansari and Shaikh, were also found guilty during the same hearing on Thursday of gang-raping an 18-year-old telephone operator one month earlier in July last year at the same mill compound. She came forward to police after the photographer’s case made headline news around the country.

Police say the photographer was threatened with a broken beer bottle by her attackers, while the male colleague accompanying her was beaten and tied up with a belt while she was assaulted. The woman, who cannot be named for legal reasons, was admitted to hospital for several days with injuries after the attack and collapsed in court as she gave evidence in October.

Police have described her four attackers as unemployed school dropouts, while three of them live in slums close to the mills. After their arrest, neighbors said that they were a gang of youths known for petty theft and drinking in the area.

“It’s going to send a strong signal to would-be offenders,” Himanshu Roy, who was joint police commissioner at the time of the attack, told the NDTV news channel, of the verdict. Roy said there were “no words which can really commend her enough” for her efforts and cooperation in the case.

The attack on the student in Delhi in December 2012 sparked weeks of angry street protests about India’s treatment of women and led to tougher laws for rapists and other sex offenders. Four men were sentenced to death last September over that attack, but the Supreme Court earlier this month stayed the execution of two of them while their appeal is heard.

Sex crimes have continued across India despite the national outrage. In one of the most high profile cases, a leading editor was charged last month with raping a colleague in a hotel lift in the coastal state of Goa.