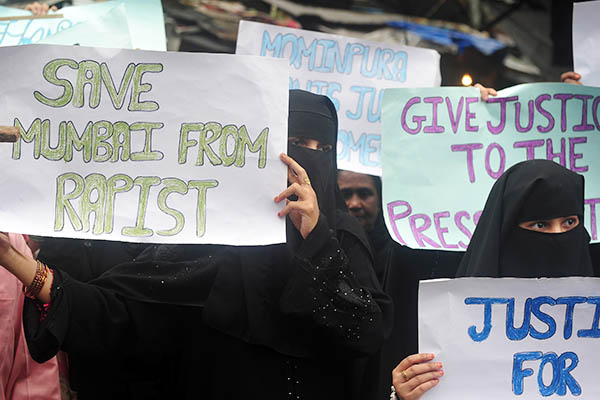 Four adult accused charged with at least five offenses, including gang rape and destruction of evidence.

Mumbai police formally charged five men in court Thursday over the gang rape of a young photographer in the city last month, a case that reignited anger about women’s safety in India.

Four adult accused, arrested within days of the attack, appeared at the Esplanade Court in south Mumbai, barefooted and looking disheveled. One wore a T-shirt and jeans while the rest were in shirts and trousers.

They were charged with at least five offenses including gang rape, unnatural sex, illegal confinement, destruction of evidence and conspiracy over the attack on Aug. 22. Charges were also filed in a juvenile court against a fifth suspect, who was under 18 at the time of the offense, said Mumbai police spokesman Satyanarayan Choudhary.

The 22-year-old photographer was repeatedly raped while she was on assignment taking photos in an overgrown and abandoned mill compound in central Mumbai. A male colleague accompanying her was beaten and tied up with a belt while she was assaulted and threatened with a broken beer bottle, police say.

The attack sparked outrage in the financial hub Mumbai, which has long been considered safer for women than the capital New Delhi, where the fatal gang rape of a young student in December shook the nation. After the Mumbai assault, the victim reported the case at a local police station and was admitted to hospital. She was discharged within a week.

She was quoted by The Times of India as saying “rape is not the end of life” and that she wanted to return to work. Her family in a statement said they were hopeful of the “severest of punishments” for those responsible. The next hearing of the case, in which officials have promised swift justice, was set for Monday.

In the Delhi gang rape, the 23-year-old victim died of grievous internal injuries on Dec. 29 after being lured on to a private bus by a gang of six following a cinema trip with her male companion, who was beaten up. Last week a court convicted four men and sentenced them to death, a sentence the judge said was intended to deter other would-be rapists.

On Thursday a minister in the northwestern state of Rajasthan resigned after he was accused of raping, threatening and beating up a woman last week. Babulal Nagar, 53, denied the allegations but said he was resigning on “moral grounds” to allow an “impartial probe,” the Press Trust of India news agency reported, adding police are investigating.

Mumbai’s top policeman Satyapal Singh drew anger after the attack on the photographer by suggesting that a “promiscuous culture” that allows kissing in public made the city less safe for women.

Since news of the Mumbai gang-rape emerged, police say a 19-year-old telephone operator has come forward to tell them she was raped in the same mill compound at the end of July, allegedly by three of the same suspects, and two others. In a further dent to Mumbai’s image, police arrested a school bus cleaner at the weekend on suspicion of raping a four-year-old in the vehicle on the outskirts of the city earlier this month.