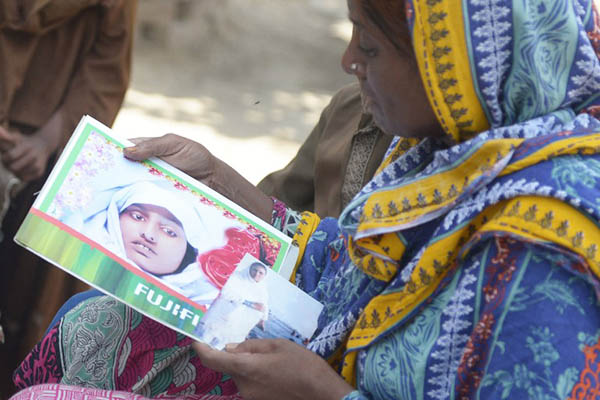 Honor killings are on the rise across Pakistan, and remain a particular point of concern in rural Sindh province.

Razia Shaikh looks up to the sky, her eyes glistening with tears as a Quran lays in her lap, seeking divine justice for one missing daughter and another slain by vengeful relatives in the name of “honor.”

The widow, in her 40s, wails as she shows two photos of her daughter—bright-eyed and vivacious in one, in the other cold and lifeless, shrouded in her white burial cloth. Shaikh is one of countless mothers to suffer the misery of “karo-kari,” murders carried out supposedly to preserve family honor or avenge some perceived slight.

The Aurat Foundation, a campaign group that works to improve the lives of women in Pakistan’s patriarchal society, says more than 3,000 have been killed for “honor” since 2008.

Sitting on a charpoy bed outside her one-room home in Sachal Shah Miani village, off the bank of the River Indus in Sindh, Shaikh recounts her tale of woe. It began when her elder daughter Khalida went missing from the home of her in-laws in Karachi in 2010. What became of Khalida is unclear, but the in-laws blamed Shaikh, a widow struggling to keep her dignity despite extreme poverty.

As Shaikh was grieving for her missing daughter, her in-laws started demanding she marry her younger daughter Shahida to another of their sons. Shaikh refused and three men broke into her home, shooting her second daughter in the back. They justified the murder by accusing her of adultery and have not been punished. “For the sake of Allah I appeal to the ministers, the judges and the police to get me justice,” said Shaikh, weeping.

Government efforts to crack down on these attacks have had little success and the killings remain a particular problem in poor and rural areas of Pakistan. In the absence of material wealth, concepts of honor and preserving the family’s good name are highly valued.

Moreover, Pakistani law allows the relatives of a victim to “forgive” the killer in return for blood money—meaning that if the relatives themselves have arranged the killing, prosecution can be avoided.

Marriages in Pakistan are usually arranged and may take place between cousins, which can add a further motive in the form of rows over dowries.

Irum Awan, a female police officer, heads a special force set up in Sindh in 2008 to fight the menace. “In most cases, ‘honor’ is just a pretext whereas the real motive is that they don’t want to give the shares in property to their sister or daughter,” Awan said.

It is not only women who suffer and not only matters of love and marriage that lead to such killings. Criminal justice in Pakistan is deeply mired in local politics, particularly in areas like Sindh where society remains largely feudal, with huge power concentrated in the hands of big hereditary landowners. And questions of “honor” can be invoked to settle other unrelated disputes.

In a small village west of the town of Sukkur, Mohammad Hasan lives in hiding after being declared “kara” by the local feudal landlord. “I was declared kara after a dispute that started about land which was mine. They wanted to capture my land,” Hasan told AFP in a tiny house. The landlord sent his men to threaten Hasan, giving him the choice of surrendering his land, his only source of income, or paying Rs. 800,000 to settle the dispute—or face the consequences. “My life is in danger—they have already attacked me three times,” said Hasan. “I am a poor man, I am just sitting at home and hiding here and there. He is an influential man, he can do anything with me.”

The abuse of women and poor men under the guise of “honor” has gone on for centuries across South Asia, but British colonial rulers suppressed the practice. “In the British rule, they would hold responsible and round up the whole village where the karo-kari would take place, and thus the menace vanished during that time,” said Javed Alam Odho, the police chief of the Sukkur region. But now weak law enforcement and poor prosecution, often influenced by powerful people, keep the killers at large.

Awan admits her frustration at the way suspects are able to work the system to avoid justice. “Some days ago we conducted, you won’t believe, more than 10 raids to arrest a person who killed his wife,” she said. “But when we produced him before the honorable judge, he released him on bail.”

Annually, estimates suggest more than 350 murders are committed in the name of honor in Sindh. “If you look at the Sindhi newspapers, two to three incidents are reported daily and this is a routine,” said Khalid Banbhan, bureau chief of Ibrat, a prominent Sindhi-language daily. “Hardly there is a day when no report appears in the newspapers about karo-kari.”

Covering the problem in rural areas is a challenging task for local journalists, who are exposed to the wrath of local feudal chieftains who are usually powerful enough to have troublemakers punished, or even killed, with few repercussions.

I didn’t expect more from a third world country