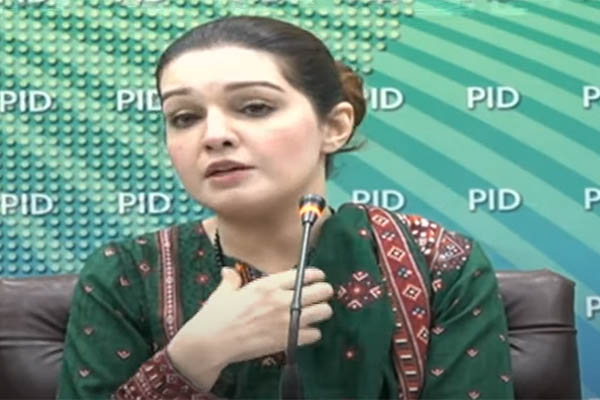 In an emergency press conference on Sunday night, Mushaal Malik—the wife of Jammu and Kashmir Liberation Front chief Yasin Malik—appealed to Pakistan Tehreek-e-Insaf (PTI) Imran Khan to delay his long march by a day or two so as not to distract public attention from the plight of her husband.

On May 19, Malik was convicted by an Indian court of conspiracy and waging war against the state after a court in Delhi had ordered the framing of charges against him in March over allegedly receiving “terror funds” from Pakistan. He is set to be sentenced on May 25, with observers warning that he faces life imprisonment or death for the conviction. In his court appearance on May 10, Malik dismissed the charges against him as being politically motivated and said he was ready to accept the consequences of the “crime” of seeking independence for Kashmir. He was been in prison for the past eight years.

“On May 25, people who love Kashmir and Yasin are taking to the streets globally to protest the [possibility] of him being sentenced to death,” she said in Islamabad alongside her daughter, Razia Sultana. “Imran Khan, you were Yasin’s friend, if you delay your long march by a day or two, it would make no difference to you,” she pleaded.

“I know internal politics are very important, but Kashmir is [more important],” she added. Her daughter, Razia, also made a personal plea to Khan, urging him to delay his long march for “just” two days. “[Indian P.M. Narendra] Modi wants to kill my father. We have to save my father. Imran Khan, please help us,” she added.

Earlier, in a separate press conference alongside Human Rights Minister Mian Hussain Pirzada, Mushaal urged the government and international community to get her husband released from prison, where he has been languishing for eight years.

“We fear for his life. We fear that in the next week the Indian government will hand down death penalty or life imprisonment to my husband who was peacefully struggling for the right of self-determination in India-held Kashmir,” she said, adding that he had been detained in a “death cell” for the past three years and Indian propagandists were portraying him as a villain to sow religious discord.

Appealing to the U.N. secretary general, as well as its Human Rights Council, she said her husband had led a freedom struggle in India-held Kashmir, just as Mahatma Gandhi and Bhagat Singh had led freedom struggles in the past. She urged the global bodies to remind India of its international commitments and ensure political activists and prisoners are given their rights.

“We would like the Government of Pakistan to convey to the U.N. Security Council the brutalities India is committing in India-held Kashmir,” she said. “We would also like to bring to their attention the fake cases against Yasin Malik and other Kashmiri freedom fighters,” she added.

Noting she had been married to Yasin for 13 years and had been repeatedly denied her basic rights to communicate with him, she noted that “if a terrorist like Kulbhushan Jadhav and his family could get their rights, Yasin Malik should also be allowed to meet his family.”

During the press conference, Human Rights Minister Mian Hussain Pirzada said the government supported Mishal and vowed to raise her concerns at international forums. He said fake charges had been levelled in Indian courts against prominent leaders like Maqbool Bhatt and Afzal Guru that resulted in their execution. “Now, another very prominent pro-freedom Kashmiri leader who has a huge following in Kashmir is on trial. We suspect that the Indian government wants to get rid of him too. His life is in danger,” he warned.

On Saturday, in a press conference alongside Mushaal, Information Minister Marriyum Aurangzeb said the government was pursuing legal, diplomatic and political options to secure the release of Yasin Malik. She said Prime Minister Shehbaz Sharif had instructed the ministries of law and human rights to prepare a brief to ensure Yasin was not executed by the Indian state.