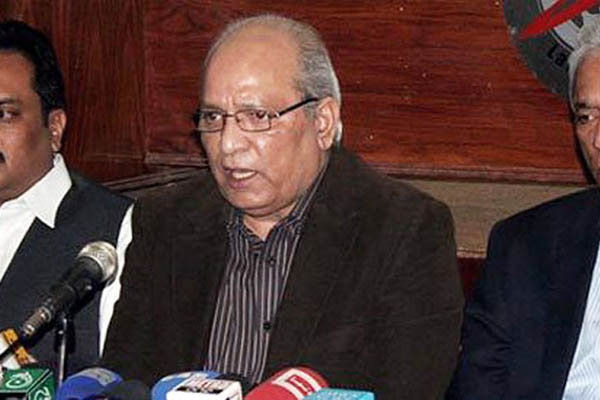 Pakistan’s climate change minister resigned Saturday, officials said, after a controversial interview with the BBC in which he claimed the country’s former chief spy had conspired to stage a military coup last year.

Mushahid Ullah Khan told the British broadcaster in an interview published online on Friday that the retired head of Pakistan’s Inter-Services Intelligence agency (ISI), Lieutenant-General Zaheer-ul-Islam, had plotted to bring down the government of Nawaz Sharif during sit-in protests in Islamabad in 2014.

Khan said in the BBC interview that Islam had worked to trigger conflict between the prime minister and Army chief General Raheel Sharif, and had planned on exploiting subsequent unrest to take over the country.

The bid failed, he said, when the civilian Intelligence Bureau (IB), which was tapping some of Islam’s telephone conversations, presented evidence of the plot to the prime minister, who then informed the Army chief. “There were voices of several people in that tape. There was also [the] voice of Zaheer-ul-Islam Abbasi,” Khan had told BBC.

Both the prime minister’s office and the military denied the claims soon after the interview was published on Friday, however, saying no such tapes existed. “The story about any tape recording as being discussed in media is totally baseless, unfounded & farthest from truth,” Maj. Gen. Asim Saleem Bajwa, the military spokesman had tweeted on Friday evening.

An official of the ministry of climate change said that the prime minister had ordered Khan back from the Maldives and asked him to resign. “He left for Maldives on Saturday morning and was called back by the government after the controversy created by his interview,” a senior official in Khan’s office told AFP on condition of anonymity because he is not authorized to speak to the media.

Khan had sent his resignation and was expected back in the country by late Saturday or Sunday, the official said.

On Aug. 14 last year, the Pakistan Tehreek-i-Insaf launched a 126-day sit-in, also supported by the religious political party Pakistan Awami Tehreek, in front of the Parliament building in Islamabad in an effort to bring down the government. The protest failed, however, largely because it could not inspire mass support from the public one year after general elections, and because the military establishment refused to move against the government.