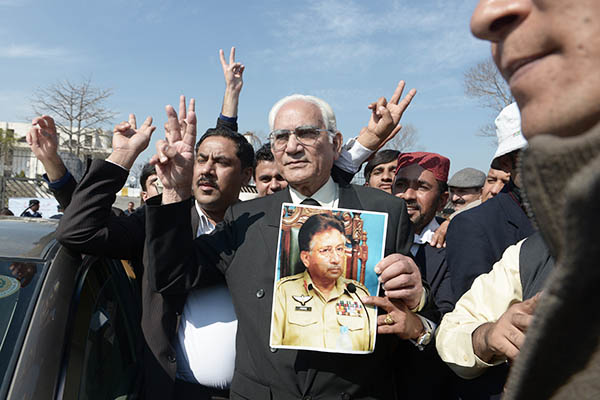 Former president has been informed that he will be formally indicted for treason, but jurisdiction issue is still pending.

Former president Pervez Musharraf became the first former Army chief to appear in a national court on Tuesday in a treason case seen as a test of civilian rule over the Army.

The 70-year-old arrived in a heavily protected cavalcade of at least half a dozen vehicles wearing a dark blazer and appearing relaxed during a hearing that lasted only a few minutes. He sat in a witness box and stood briefly when addressed by the judge, but did not speak. Asked afterwards how he was feeling, he said that he was “good.”

He faces treason charges, which can carry the death penalty, over his suspension of the Constitution and imposition of a state of emergency in 2007 while he was president. He was first ordered to appear before the tribunal on Dec. 24, but has missed repeated hearings since then due to bomb scares and health problems, including a heart ailment.

His defense lawyer Anwar Mansoor argued Tuesday that judge Faisal Arab had not responded to a challenge to the court’s ability to try the former general, which Arab promised to decide on Friday. Musharraf has challenged the civilian court’s right to try a former Army chief, saying he is entitled to be dealt with by a military tribunal.

He has also accused Prime Minister Nawaz Sharif, whom he ousted in a 1999 coup, of waging a “vendetta” and has asked for permission to go abroad for medical treatment, which has been refused. “We can call him again after deciding on the jurisdiction issue,” Judge Arab said after declaring that he intended to formally indict Musharraf.

Musharraf has endured a torrid time since returning to Pakistan in March last year on an ill-fated mission to run in the general elections. Almost as soon as he landed he was barred from contesting the vote and hit with a barrage of legal cases dating back to his 1999-2008 rule. The charges against him include the murder of former prime minister Benazir Bhutto in December 2007.

So far, nothing has come of rumors that a backroom deal would be struck to get Musharraf out of the country before trial to avoid a destabilizing clash between the government and the armed forces.

There were tight security arrangements all around the National Library in Islamabad where the court has been holding hearings on the treason case. Musharraf’s cavalcade from a military hospital in Rawalpindi was flanked by police and paramilitaries with the lead vehicle equipped with a mounted machinegun. A wall of shipping containers had also been constructed around the library and jamming devices to prevent mobile phone signals were in operation, even inside the court.