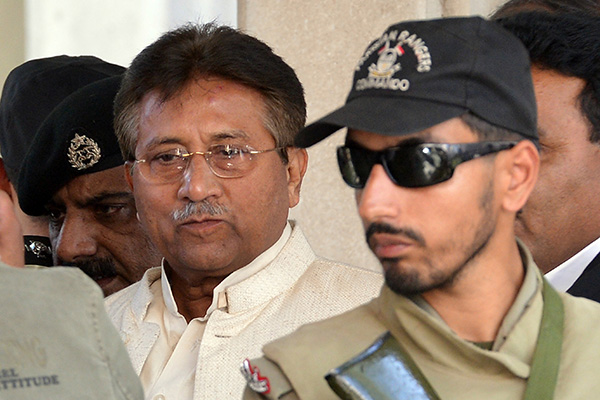 Pervez Musharraf was granted bail on Tuesday in a second case related to his nine-year rule, bringing closer his possible release after nearly two months of house arrest.

The retired general, who returned from four years of self-imposed exile in March, is officially barred from leaving the country and has been detained at his home on the edge of Islamabad since April 19. Last month, he won bail over charges that he conspired to murder former premier Benazir Bhutto, and on Tuesday for his dismissal of judges and imposition of emergency rule in 2007.

Musharraf’s lawyer Ilyas Siddiqui said that bail had been posted at Rs. 1 million and that his defense team would seek bail in a third case dating back to his 1999-2008 rule.

Tuesday’s decision is likely to fuel speculation that a deal could be reached to allow Musharraf to leave Pakistan without facing the courts.

“The court has accepted his bail application. He has been asked to furnish surety bonds,” said Mohammad Amjad, spokesman for Musharraf’s All Pakistan Muslim League party, which won two seats in last month’s elections. Amjad said the bail order would end Musharraf’s house arrest, although the former leader is also wanted over the 2006 death of a Baloch rebel leader.

Aides say a court in Quetta has issued orders for Musharraf’s arrest over the 2006 death of Akbar Bugti, but that his team will apply for pre-arrest bail in the final case. They also say they will petition Pakistan’s highest court to have his name removed from the exit control list, which would allow him to leave the country. “He cannot leave the country until the Supreme Court orders to remove his name from the ECL. Only then he can leave the country,” said Amjad.

Arresting a former chief of the Army was an unprecedented move in a country ruled for more than half of its life by the military and was seen by many as a challenge to the armed forces’ power. On Sunday, the Pakistani Taliban issued a fresh threat to assassinate Musharraf, who was a key ally of the United States in its war against Al Qaeda.