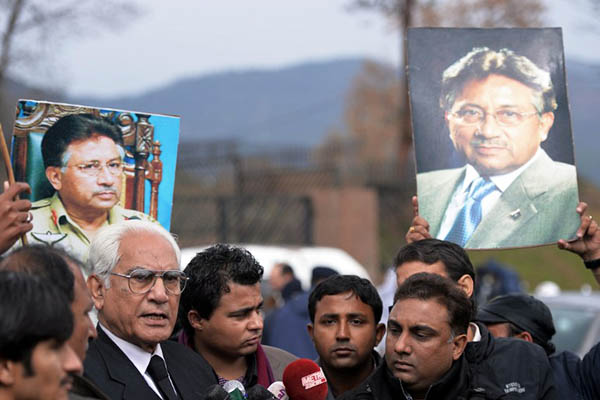 Judge directs former president to ensure all security arrangements and appear before court on Friday.

Judges hearing treason charges against Pervez Musharraf on Tuesday adjourned his formal indictment to the end of the week after an official report said the former president’s life was under threat.

Musharraf, who ruled from 1999 to 2008, became the first former Army chief to come before court on treason charges last month. The court was due to indict Musharraf on Tuesday over his 2007 imposition of emergency rule, but lead judge Faisal Arab exempted him from appearing until Friday after his lawyers presented an interior ministry report citing security threats.

“We exempt him for today’s appearance but he should appear in court by Friday and all required security arrangements in the wake of this threat should be made by Friday,” Arab said.

The report, seen by AFP, said: “It seems that the terrorists have sympathizers in the security/cavalcade of (Musharraf) in order to assassinate him.”

It added the plan may be executed through planted or vehicle-borne explosives, or even at the court in a manner “similar to the incident of Salmaan Taseer”, a governor who was shot dead by his own security guard in 2011 after demanding reform of the country’s blasphemy laws.

One of Musharraf’s lawyers was thrown out of the hearing after appearing to threaten a judge. Advocate Rana Ijaz told Arab he had been threatened by gangsters for his work on the case, adding: “I have many supporters and if something happens to me they will take care of you.” Arab, who heads a three-member panel hearing the case, responded by having security escort Ijaz out.

Musharraf has endured a torrid time since returning to Pakistan in March last year on an ill-fated mission to run in the general elections. Almost as soon as he landed he was barred from contesting the vote and hit with a barrage of legal cases dating back to his 1999-2008 rule.