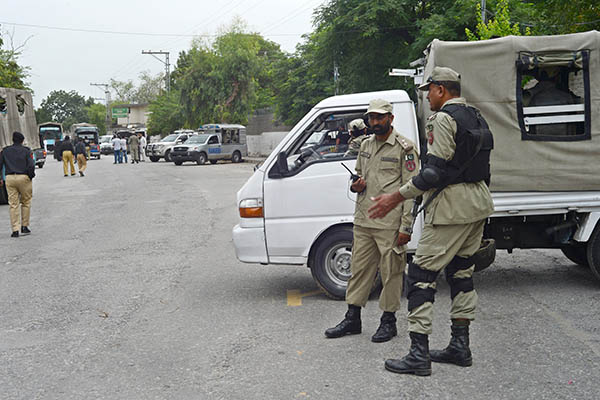 Former president unable to attend court proceedings for indictment over threats to his life.

Pervez Musharraf on Tuesday failed to appear in court to be indicted over the murder of former premier Benazir Bhutto due to what police said were security concerns.

Musharraf, who ruled Pakistan from 1999-2008, had been summoned to face charges of criminal conspiracy and the murder of Bhutto in December 2007.

But police and his lawyer told the court in Rawalpindi, the city where Bhutto was assassinated, that it was not safe enough to bring Musharraf to the court due to threats against his life.

Judge Chaudhry Habibur Rehman adjourned the indictment until Aug. 20 and ordered Musharraf to appear then.

Charging a former Army chief would be an unprecedented move in a country ruled for more than half of its life by the military. There is, however, lingering speculation about the possibility of a behind-the-scenes deal that could allow him to leave Pakistan without facing the courts and undermining the military.

Musharraf, who has been under house arrest at his plush villa on the edge of the capital Islamabad since April 19, had appeared before the court in person on July 30.

Musharraf’s lawyer Syeda Afshan Adil told the court that security threats meant her client could not appear in person. A police official also confirmed that officers were unable to escort Musharraf to the courthouse due to security risks.

An AFP reporter said there was tight security at the court with police commandos checking vehicles and patting down pedestrians.

Bhutto, twice elected prime minister of Pakistan, was assassinated in a gun and bomb attack in December 2007 after campaigning in the garrison city of Rawalpindi. There was no public claim of responsibility for her murder.

Musharraf’s government blamed her assassination on Pakistani Taliban chief Baitullah Mehsud, who denied any involvement. He was killed in a U.S. drone attack in 2009.

The Bhutto case is one in a series of court battles that Musharraf has faced over allegations dating back to his 1999-2008 rule, since he returned in March from four years of self-imposed exile.

The new government headed by Nawaz Sharif, whom Musharraf deposed in a coup in 1999, has said he should stand trial for treason and has appointed a committee to investigate the charges against him. The offence carries the death penalty or life imprisonment.

He is also wanted over the death of Baloch rebel leader Nawab Akbar Bugti during a military operation in 2006.

Amnesty International released a statement, intended to coincide with Tuesday’s indictment, demanding that Pakistan hold Musharraf accountable for all rights violations committed during his rule. “It is encouraging to see the courts take the unprecedented step of bringing a former army chief to account,” said Polly Truscott, Amnesty International’s deputy Asia Pacific director. “But Musharraf must be held accountable for all violations committed under his rule, not just a select few,” she added.

The London-based rights group says it has documented a wide range of rights violations committed under Musharraf. “Hundreds, if not thousands, were ‘disappeared’ during Musharraf’s administration in particular human rights activists documenting violations committed by state security forces and members of armed opposition groups,” said Truscott.

Pakistani security forces continue to be implicated in the killing, enforced disappearance and torture of terrorism suspects, political activists and human rights defenders, it said. “No serving or retired member of Pakistan’s security forces is known to have been brought to justice for their alleged involvement in these violations,” said Truscott.

Musharraf, 69, was arrested after returning from exile to stand in the May elections won by Sharif. He was barred from running for Parliament because of the legal allegations against him.