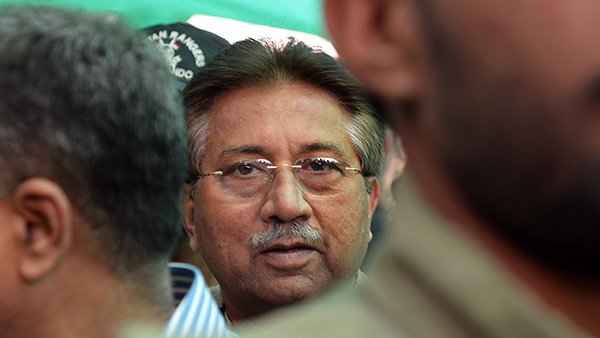 Former president interrogated at his Islamabad home, where he remains under house arrest.

Pakistani police on Thursday questioned Pervez Musharraf, the former president and Army chief, over the 2006 death of a rebel leader—one of three legal cases that have blighted his return from self-exile, officials said.

The retired general ended his self-imposed exile in March to contest the May 11 elections. He is currently under house arrest in connection with two other legal cases and has been barred from running for Parliament.

“A three-member team [from] Balochistan comprising senior police officials is investigating General Musharraf,” prosecutor Hassan Kakar said. They would also record his statement in the case, he added.

Baloch nationalist leader Akbar Bugti was killed in a cave on Aug. 26, 2006, during a military crackdown in which Army personnel also died. Bugti was the chief of the Jamhoori Watan Party and an influential tribal chief who controlled the gas-rich district of Dera Bugti.

Musharraf is being held under house arrest over the 2007 assassination of former prime minister Benazir Bhutto and for sacking judges in 2007 when he imposed emergency rule.