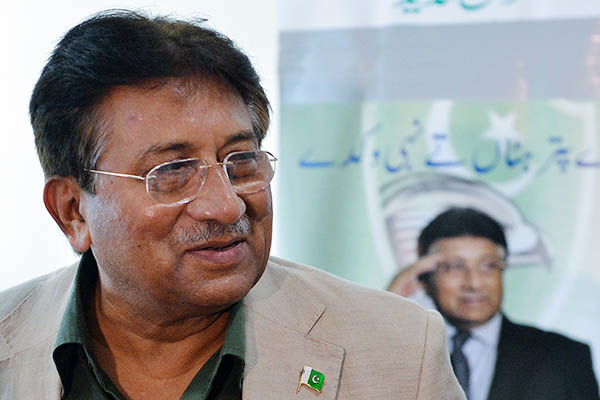 Former president claims ‘whole Army’ is upset with treason allegations that require him to appear before a special tribunal.

Pervez Musharraf on Sunday denounced treason charges against him as a “vendetta,” and said he had the backing of the country’s Army.

The 70-year-old told reporters the “whole Army” was upset with the treason allegations, in his first comments to international media since he was put under house arrest in April.

The allegations relate to Musharraf’s imposition of emergency rule in November 2007, and are the latest and potentially most serious in a flurry of criminal cases he has faced since returning to Pakistan in March. The case puts the government on a possible collision course with the Army, which is reluctant to see its former chief suffer the indignity of being tried by a civilian court.

An initial hearing in the case, being heard by a special tribunal, was halted on Dec. 24 after explosives were found along the route Musharraf was to take to court. The case is due to resume on Jan. 1, but Musharraf said he had not yet decided whether or not he would attend.

“The way this tribunal was formed, which involved the prime minister and the ex-chief justice, this itself smacks a little bit of a vendetta,” he said.

The former chief of Army staff’s lawyers have dismissed the charges as an attempt by the government of Prime Minister Nawaz Sharif, who Musharraf ousted in a coup in 1999, to settle old scores through the courts.

The army has no choice but to support Musharraf, if the army stops supporting its own, their own existence would be at risk………so, this is really no surprise