Home Latest News Musharraf to Appear in Court on Dec. 24

Musharraf to Appear in Court on Dec. 24 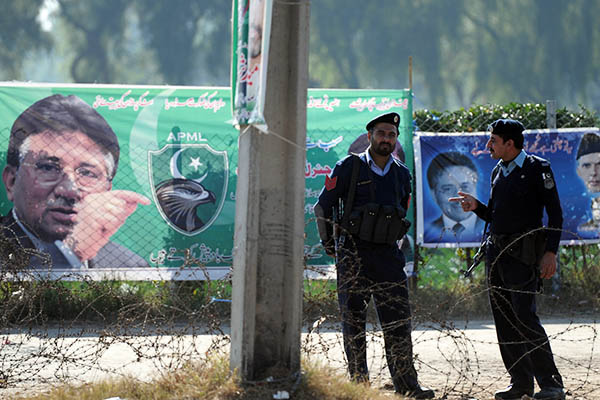 A special court on Friday summoned former president Pervez Musharraf to appear in a high treason case, an offence that could see him face death or life in prison, a government prosecutor said.

“Musharraf has been ordered to appear before the court on Dec. 24,” said Akram Sheikh, the head of the government prosecution team. It will be the first time in Pakistan’s history that a former military ruler will face a treason trial.

The Supreme Court in November accepted a government request to set up a special tribunal to try Musharraf for high treason. The government of Prime Minister Nawaz Sharif later chose the three judges who comprise the tribunal.

A government official said the special court, headed by Justice Faisal Arbab, acceded to the government request to try Musharraf during the hearing on Friday, after accepting a government charge sheet against the former ruler.

According to Pakistan’s Constitution, anyone found guilty of abrogating, subverting, suspending and holding in abeyance the Constitution shall be guilty of committing the offence of High Treason. The treason accusation relates to Musharraf’s decision in 2007 to impose emergency rule shortly before the Supreme Court was due to decide on the legality of his re-election as president a month earlier, while he was still Army chief.

Musharraf overthrew the government of Nawaz Sharif—elected to power again in May this year—in a bloodless military coup in October 1999, but a year later the Supreme Court validated the take-over.

During the 2007 period of emergency rule he suspended the Constitution and Parliament, and sacked top judges who declared his actions unconstitutional and illegal.