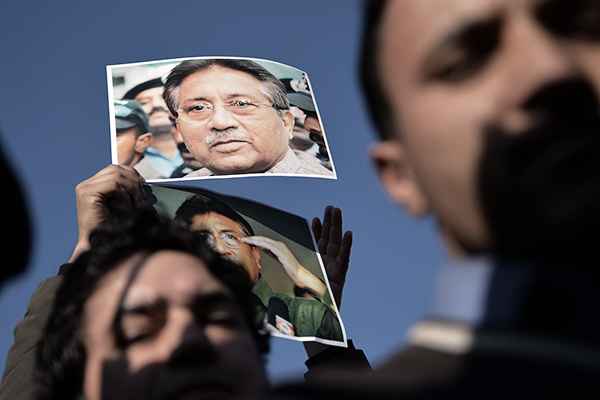 Legal team claims government is attempting to ‘fix’ the proceedings and demands investigations into the allegations.

Lawyers for former president Pervez Musharraf called on Friday for his treason trial to be suspended because they claim the government is colluding with elements of the judiciary to “fix and manipulate” the proceedings.

The legal team said it based its claim on “leaked secret communication” from an unnamed source in the office of Prime Minister Nawaz Sharif. In a statement issued in London, the former Army chief’s lawyers called for an “immediate and unconditional suspension of the Special Court and a comprehensive investigation” into their claims. They also urged King Abdullah of Saudi Arabia to intervene and support Musharraf in return for the former president’s role in developing “brotherly relations” between their countries.

Musharraf, 70, is the first former military ruler in Pakistan’s history to face trial for treason and the case is viewed as a test of civilian authority over the military. He appeared in court on Feb. 18, but since then has missed repeated hearings due to bomb scares and heart problems. The special tribunal hearing the case last week ordered Musharraf to appear in person on March 31 or face arrest.

Musharraf’s lawyers said Sharif has “manipulated the Pakistani legal process and used unlawful influence on the … judiciary to bring a barrage of unsubstantiated charges” against Musharraf, his long-time political rival. They gave no specific details of their new claims, but said they had submitted them to the office of U.N. human rights chief Navi Pillay.

Musharraf’s lawyers have already written to the U.N. urging it to intervene to stop what they call a “show trial,” claiming Sharif has handpicked the three judges hearing the case.

Toby Cadman, an international human rights lawyer on Musharraf’s team, said: “There is an obvious conflict of interest between the judiciary in charge of the former president’s trial and the issue at stake. The recent disclosure demonstrates the level of collusion between the executive and the courts.”

The treason accusation relates to Musharraf’s decision in 2007 to impose emergency rule shortly before the Supreme Court was due to decide on the legality of his re-election as president a month earlier, while he was still Army chief.